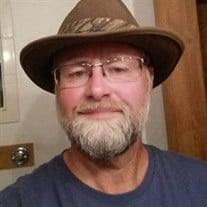 CLINTON – Gary W. Ledbetter, age 57 of Clinton, passed away Wednesday, August 1, 2018, at the VA Medical Center in Ann Arbor. He was born December 28, 1960, in Detroit, Michigan, the son of Ernest and Lera (Duncan) Ledbetter. Gary was a proud veteran, serving in the United States Army for 6 years. He drove truck for Gentner Transport Trucking Company, and more recently for General Transit in Dearborn. In addition to his mother, Lera, he is survived by two daughters, Chrisa Ledbetter and Stephanie (Danny) Nash, both of Adrian and four grandchildren. He was preceded in death by his father, Ernest; a brother, Lester Ledbetter; and a sister, Brenda Reno. Funeral services for Gary will take place at 11 a.m., Thursday, August 9, 2018 at Wagley Funeral Home Adrian, with Pastor Gary Adams officiating. Visitation will be held at the funeral home from 3 to 7 p.m., Wednesday. Gary will be laid to rest in his family plot at Graves Cemetery in Perry County, Tennessee. Online memories and condolences may be shared at www.WagleyFuneralHomes.com.

The family of Gary W. Ledbetter created this Life Tributes page to make it easy to share your memories.

Send flowers to the Ledbetter family.