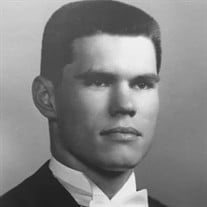 MIDDLETOWN, CT- Floyd J. Tucker, age 94 of Middletown, CT, beloved husband, father and grandfather, passed away on November 3, 2020. He was born on January 29, 1926, to James and Alice (Lohman) Tucker of East Saugatuck, MI. At an early age, Floyd moved with his family and grew up in Adrian, MI. After service in the Army Air Corp during World War II, he graduated with the Adrian High School Class of 1946. In school, Floyd lettered in both track and football, receiving all state honors in football in 1943. Floyd went on to attend Adrian College and the University of Michigan. He graduated from the Detroit College of Law with a degree in 1950 and passed the Michigan Bar, where he was admitted to practice law in Michigan. On July 3, 1954, Floyd married Geraldine “Gerry” Bailey in Adrian, and they have shared 66 wonderful years together. He joined the Claim Department of the Travelers Insurance Company in Detroit in 1951. The following year he was promoted to Assistant Supervisor. In 1956, he was transferred to the home office in Hartford, CT, as an examiner; and in 1964 was appointed Assistant Secretary and Secretary in 1970. In 1972, Floyd was promoted to Vice President in the Casualty-Property Division where he was responsible for all general liability, legal and medical malpractice claims and lawsuits nationwide. Retiring in 1989, Floyd and Gerry returned to the Adrian area until 2014, when they moved back to Connecticut to be closer to their children. Floyd is survived by his loving wife, Gerry; daughters, Cynthia (Mark) Higgins of Ponte Verde, FL, Jeraldine J. Tucker of Middletown, CT, Jacqueline J. DiMatteo of Rocky Hill, CT and daughter-in-law, Maureen Gorman-Tucker of Madison, CT; grandchildren, Heather Higgins (finance Jimmy Gudger), Tucker Higgins, Thomas DiMatteo and Maxwell DiMatteo; along with nieces and nephews. He was preceded in death by his parents, brothers, Almer and Earl and his son, Thomas C. Tucker. Funeral services will be held on Friday, November 13, 2020, at 1 p.m. at Wagley Funeral Home, Adrian, with Rev. Larry Betz officiating. Burial will follow at Oakwood Cemetery with full military rites being conducted by the Annis-Flint Post #1584 and the American Legion Post #97 of Adrian. Visitation will take place from 11 a.m. until the service begins. In lieu of flowers donations can be made to The Tom Tucker Memorial Fund online at www.HFPG.org or sent directly to the Hartford Foundation for Public Giving at 10 Columbus Blvd., 8th Floor, Hartford, CT 06106. Following the Governor’s executive order, all attendees are required to wear a proper face covering, with the exception of those under the age of five years old or those who cannot medically tolerate. For those unable to be present, a live streaming of the service will be accessible from Floyd’s tribute wall on www.WagleyFuneralHome.com, where a link to view the recording will be available for 90 days. The graveside recording can be viewed by clicking here: https://youtu.be/MyZKORP22dU Online memories and condolences may be shared at www.WagleyFuneralHomes.com

The family of Floyd J. Tucker created this Life Tributes page to make it easy to share your memories.

Send flowers to the Tucker family.