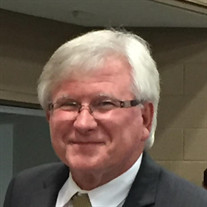 ADRIAN- Floyd “Sonny” Fred Johnson Jr., age 69, of Adrian, MI, passed away unexpectedly on January 25, 2019 at Elkhart General Hospital in Elkhart, Indiana. He was surrounded by his loving family and close friends. Sonny was born on October 27, 1949, in Adrian, MI, to the late Floyd Sr. and Lucille Johnson. On May 12, 1979, he married Dawn Rene’ Dean in Buchanan, MI. They would have celebrated their 40th wedding anniversary this May. Dawn survives along with their two children, Derek (Lee) Johnson of Onsted, MI, and Lauren (Brandon) Ford of Fort Wayne, IN; two sons, Matt Johnson and Mitchell Johnson; Aunt, Barbara Parrish of Adrian, MI.; sisters, Shirley (Larry) Isabel of Adrian, MI and Charlotte Burdine of Morenci, MI; one brother, Jim (Kathy) Johnson of Onsted, MI; four grandchildren, Lilianna, Audrey and Brielle Johnson and Jackson Ford and many nieces and nephews. He was preceded in death by his sister, Joan Johnson. Sonny was baptized as one of Jehovah’s Witnesses on August 29, 1976 and he served as an elder for his local congregation beginning in April 1985. Sonny became a Nationwide Insurance Agent in 1973 and owned and operated Floyd Johnson Insurance Agency in Adrian, MI until his retirement in 2012 when his son Derek took over the business under the family name. Sonny continued to work there until his death. Sonny was a deeply spiritual man who loved his family and grandchildren with all his heart. Sonny had a profound love for the Bible and teaching others the truths he had learned. He was also a pillar of the community with his kind heart, generous spirit, and a willingness to help everyone he met. Close friends and family have described him as loving, funny, with an infectious laugh and huge smile. He had the unique ability to see the positive in everyone, everything, and was generous beyond a fault. If you needed help, Sonny was always available. Sonny had a love for gardening and shared much of his bounty with the local restaurants and friends in Adrian. Sonny’s love of the water came from his childhood memories living in Florida. He and his wife, son and daughter enjoyed many trips to Florida to visit family and go fishing, which was a favorite pastime. His loss will be deeply felt by family and friends, however we look forward to being reunited with him in the resurrection to come. We cannot express enough the deep appreciation to all our family and personal friends that provided lodging, food, comfort and prayers for Dawn and her children, Derek and Lauren. The memorial service will be held on Sunday, February 24, 2019 at 2pm at Dawson Auditorium Adrian College, 240 S. Charles St., Adrian, MI. Tim Blue from Elkhart, Indiana will officiate the service. Arrangements have been entrusted to Wagley Funeral Home where online condolences and memories may be shared at www.WagleyFuneralHomes.com

The family of Floyd "Sonny" Fred Johnson created this Life Tributes page to make it easy to share your memories.

Send flowers to the Johnson family.