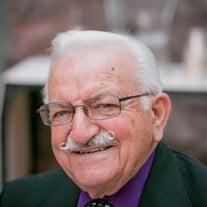 ADRIAN – Fayette V. “Shorty” Miller, age 92 of Adrian, went home to be with his Lord and Savior Saturday, May 29, 2021, while under the loving care of his family with the assistance of Hospice of Lenawee. He was born January 29, 1929, at home in Fort Plain, New York, to the late ER and Ada (Smith) Miller, the seventh of their twelve children. After graduating from Canajoharie High School in New York, he joined the Army and was stationed at Fort Custer in Battle Creek, Michigan. It was there that he met Thelma Summers whom he married June 1, 1952. Their love story included almost 69 years of marriage, three children, five grandchildren and two great grandchildren. Fayette worked for both Hadden Tire and Firestone Tire before he started his career of truck driving. In his retirement he sold and installed windows and fences. He excelled at carpentry, woodworking, remodeling homes and refinishing furniture. Fayette served as Dover Township Supervisor as well as on the Dover Township Tax Review Board and the Lenawee County Drain Commission. Fayette was involved with the Republican Party. He was a faithful member of Bethany Assembly of God where he was active in their mission work, going on 11 mission trips. Fayette was also actively involved with the Gideons and Light for the Lost. In addition to his wife, Thelma, he is survived by their children, Jeffery (Debra) Miller, Jennifer Obenour, and John (Lisa) Miller; grandchildren, Dustin, Kelly, Jamie, Gregory and Trenton; great grandchildren, Emily and Austin; a sister, Elreda Hughes; and exchange student grandchildren, Kevin, Luis, Fernando and Victor. Besides his parents he was preceded in death by his siblings, Theron Miller, Grace Handy, Reva Antis, Charles Miller, Eva Mereness, Howard Miller, Edmond Miller, Vivian Jones, Milford Miller and Everett Miller. Funeral services will take place at 11 a.m., Saturday, June 5, 2021, at Wagley Funeral Home with Pastor Ron Sparks officiating. Burial will follow at Lenawee Hills Memorial Park with military honors conducted by the VFW Annis-Fint Post #1584 and American Legion Post #97. Visitation will be held at the funeral home Friday, from 4 to 8 p.m. Contributions in memory of Fayette are suggested to the Gideons, Bethany Assembly of God, Christian Mission, or Hospice of Lenawee. Online condolences and memories may be shared at www.WagleyFuneralHomes.com.

The family of Fayette "Shorty" Miller created this Life Tributes page to make it easy to share your memories.