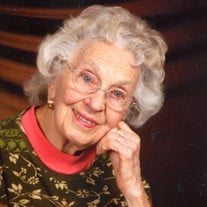 She was born September 27, 1920, in Anderson, South Carolina, to Lester and Sally (Tollison) Martin, and graduated from Hanna High School in Greenville. On December 27, 1943, Connie married Raymond J. Sack, and he preceded her in death in 2001, having celebrated 58 years of marriage. Connie and Ray J. worked together at their business, EZ Way Laundry in Adrian. She was a faithful member of St. Joseph Catholic Church in Adrian. Connie was also a member of the Red Hat Society, a 60 year member of the Bixby Medical Center Auxiliary, and the Moose Lodge. She remained active her entire life, playing golf and bowling in her younger years, and in later years, exercising three times a week at the Adrian Senior Center. She is survived by her children: Carolyn (Jim) Fisher, Steve (Linda) Sack, and Chris Sack, all of Adrian; grandchildren Tradd Paulson and his daughters, Amaris, Abigail, Anna and Alison; and Hilary Johnston and her children, Harley and Beckett. In addition to her husband, Ray J., she was preceded in death by a brother, James Martin of Washington, DC, and sisters, Edna Hunter, Vivian Morris and Bessie Dowling of Greenville, South Carolina. Mass of the Christian Burial will take place at 11 a.m., Thursday, December 7, 2017, at St. Joseph Church, Adrian, with Rev. Thomas Murphy as Celebrant. Visitation will be held at Wagley Funeral Home Wednesday, from 2 to 6 p.m. and again Thursday at St. Joseph church from 10 am until the service. Contributions in memory of Connie are suggested to Hospice of Lenawee, Adrian Senior Center or Lenawee Humane Society. Online condolences and memories may be shared at www.WagleyFuneralHomes.com.

She was born September 27, 1920, in Anderson, South Carolina, to Lester and Sally (Tollison) Martin, and graduated from Hanna High School in Greenville. On December 27, 1943, Connie married Raymond J. Sack, and he preceded her in death in 2001,... View Obituary & Service Information

The family of F. Connie M. Sack created this Life Tributes page to make it easy to share your memories.

Send flowers to the Sack family.