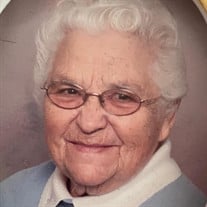 ADRIAN – Evelyn Marie Underhill, age 90 of Adrian, MI, passed away on August 14, 2021, at home with her family by her side. She was born in Scott, Ohio, on September 17, 1930, to the late William H. and Iva (Fox) Black. She married Cary H. Underhill Sr. November 9, 1947, and he preceded her in death on October 8, 1995. Evelyn worked at Fayette Tubular in Fayette, Ohio for about 2 years before she and Cary purchased the Party Center Store which they owned for 17 years. They also purchased the Hill Tavern in Adrian. Evelyn retired so she could enjoy her several grandchildren and her love of shopping. She was a collector of many things including praying hands and angels. Surviving Evelyn is her son, Cary H. Underhill and friend June Beagle; daughters, Marcia (Ed) Bayles and Peggy Bice all from Adrian; daughter-in-law, Terri Underhill of Yucca, AZ; and several grandchildren, great grandchildren and great great grandchildren. Evelyn also has two brothers, Francis (Nancy Lindsay) Black of Berne, IN and Lowell (Sherry) Black of Hillsdale, MI; and a sister, Emma Griffiths, of Angola, IN. In addition to her husband, Cary, she was preceded in death by her parents, three sons, Lester, David and Mark Underhill; four brothers, John, Lester, Herbert and Leonard Black; a sister, Laura Black; two grandsons, Shay Cook and Matthew Underhill; and sons-in-law, Carl L. Helf and Jim Bice. Funeral services will take place at 11 a.m., Saturday, August 21, 2021, at Wagley Funeral Home with her great grandson, Pastor Anthony Harris officiating. Visitation will be held at the funeral home Friday from 4 to 7 p.m. Burial will follow at Lenawee Hills Memorial Park in Adrian. Contributions in memory of Evelyn may be made to Hospice of Lenawee or American Cancer Society. Online condolences and memories may be shared at www.WagleyFuneralHomes.com.

The family of Evelyn Marie Underhill created this Life Tributes page to make it easy to share your memories.

Send flowers to the Underhill family.