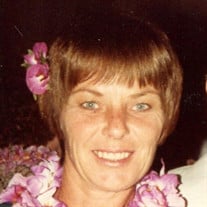 BLISSFIELD – Evelyn “Jeanette” Tibbs, 82, of Blissfield passed away early morning, on Monday, May 29, 2017 at her home under the loving care of ProMedica Hospice and her family. Jeanette Tibbs was born on February 9, 1935 in Greenville, MI to Truman and Vivian (Betser) Bissell. On September 14, 1958, Jeanette married James “Jim” W. Tibbs in Jackson, MI. In 1960, the family moved to Blissfield. Jeanette raised their family while the two young entrepreneurs started their business. As her children grew, Jeanette was active in their lives through the schools, activities, and was even their “Class Mom.” She enjoyed sailing, golfing, skiing and crafting. She was also a member of the Blissfield Decorating Committee and the local “Welcome Wagon.” In 1984, Jeanette and Jim became true “Snowbirds” and wintered in Carefree, AZ. Upon her retirement, she enjoyed world travel, fine dining, and making jewelry for those around her. Jeanette believed that everyone should have some “bling” in their lives. Jeanette is survived by her daughter, Jeana Tibbs Jordan of Blissfield; grandchildren, Christopher Jordan and Kathleen Jordan; sister, Jacqueline (Richard) Hayes of California; and sisters-in-law, Jane (Herb) Clark and Chris (Jack) Tibbs, along with many nieces, nephews, cousins and other extended family in the Manitou Beach and Greenville, MI areas. She was preceded in death by her parents, Truman Bissell and Robert and Vivian Nichols; husband, James “Jim” Walter Tibbs in August 2016; son, Sam Tibbs in 2013; brother, Truman “Moose” Rigdon; and son-in-law, Mark Steven Jordan. At Jeanette’s request, cremation has taken place. A memorial Celebration of Life will take place on Saturday, June 3, 2017 at 11:00 a.m. at the Wagley Funeral Home, Tagsold Chapel in Blissfield with Rev. Larry Betz officiating. Burial will follow at Pleasant View Cemetery. Visiting hours will be on Friday, June 2 from 2 to 4 and 6 to 8 at the funeral home. The family suggests that memorial contributions be made to Hospice of Lenawee. Online condolences and memories may be shared with the family at www.wagleyfuneralhomes.com.

The family of Evelyn "Jeanette" Tibbs created this Life Tributes page to make it easy to share your memories.

Send flowers to the Tibbs family.