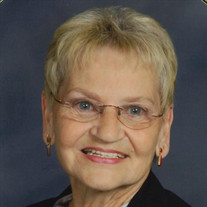 ADRIAN – Evelyn Marie Southwell, 88, of Canton, MI, died Tuesday evening, December 14, 2021, at the home of her daughter, Luann Rock of Adrian, surrounded by her loving family while under the compassionate care of Hospice of Lenawee. Born August 9, 1933, she was the only child of Flossie Putnam, who died shortly after her birth. Evelyn was adopted and raised as a young child by Melvin and Mae Putnam. Upon Mae’s early passing, Melvin was re-married to Anna McWhorter, she continued to help raise Evelyn into adulthood. In 1984 Evelyn married Vernon Southwell in Gatlinburg, TN. They shared many years of love, laughter, and memories, until he preceded her in death 2004. Upon completing high school, Evelyn earned her business degree from Cleary College on the campus of Eastern Michigan University. She used her degree for her life’s passion, cooking. Evelyn was the owner and operator of “The Campfire” Restaurant in Milan, then went into business with her husband, Vernon to own “The Villager” Restaurant in Clinton. Her love of cooking continued well into retirement. She was proud to organize and cook for events for the over 800 homes at the “Swiss Tennis & Golf Retirement Community” in Winter Haven, FL, where she resided. In her spare time, Evelyn enjoyed golf and was an avid reader. She was a member of the Red Hat Society and the Clinton United Methodist Church. She was a generous, giving soul. Evelyn made sure seniors and shut-ins were fed through volunteering for meals-on-wheels. She also provided coats, gloves, and scarves to needy children at Christmas, by placing a “Giving Tree” in her restaurant “The Villager” in Clinton. Evelyn was a friend to everyone she met. Her love radiated out to touch the hearts of all who knew her. Evelyn is survived by her children, Suzan Thatcher (Stephen Jones) of Ojai, CA, Luann Rock of Adrian, Theresa Ghrist of Canton, MI, and Guy (Mary) Johnson of Milan; step-son, Vern (Becky) Southwell of Grass Lake; many grandchildren and great-grandchildren; and her countless friends scattered between Manitou Beach, Milan, and Winter Haven, FL. She was preceded in death by her parents; husband, Vernon; son, Fred Thatcher; and sons-in-law, Kenneth Rock and Eugene Ghrist. In accordance with Evelyn’s final wishes, cremation will take place and she will be laid to rest in Marble Park Cemetery in Milan with her parents and beloved husband, Vernon. Arrangements were entrusted to Wagley Funeral Home, Adrian. The family suggests that memorial contributions to honor Evelyn be made to Hospice of Lenawee. Online condolences and memories may be shared at www.WagleyFuneralHomes.com.

ADRIAN &#8211; Evelyn Marie Southwell, 88, of Canton, MI, died Tuesday evening, December 14, 2021, at the home of her daughter, Luann Rock of Adrian, surrounded by her loving family while under the compassionate care of Hospice of Lenawee. Born... View Obituary & Service Information

The family of Evelyn Marie Southwell created this Life Tributes page to make it easy to share your memories.

Send flowers to the Southwell family.