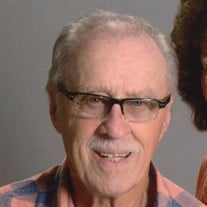 ADRIAN – Eugene Albright, age 84, of Adrian, went to be with the Lord in the early morning hours of Saturday, October 30, 2021. He was born on May 7, 1937, in Adrian, a son of Alfred Leonard and Alice (Hunt) Albright. Eugene attended Adrian High School and was a lifelong resident of Adrian. On May 24, 1955, he married the love of his life, Rachel Elaine Walters, at the Adrian United Brethren Church in a ceremony led by Rev. Peters. They have been blessed with 66 wonderful years of love and memories. Eugene worked as a die cast operator for Ford Motor Company in Rawsonville, where he formally retired from in 1993. His enjoyed almost as many years in retirement as he did his working career. Never idle, after retirement he took a class to learn the skill of small engine repair, a service that always kept Rachel’s mower maintained and their yard well-manicured. He took great pride in his yard and garden each year. Eugene also enjoyed collecting and shooting firearms. He and Rachel enjoyed several winters in Bradenton, Florida, which became a popular place for their family to visit them each year. Eugene loved the Lord, his family, and all of God’s people. He was friendly and quick to greet anyone he encountered, never meeting a stranger. Remembered by his family as a selfless husband and father, he was first to lend a hand to anyone in need, always putting himself last. He was an active member of the Life House Ministries Church in Tipton. Prior to that, the family attended and were active members of the Adrian Assembly of God Church. Surviving in addition to his beloved wife, Rachel, Eugene is survived by their five children, Roxanne (Jim) Burton of Adrian, Suzanne (Rodney) Wilt of Adrian, Lou Ann (Kent) Cannon of Deerfield, Kim Cremeans of Deerfield, and Kevin (Sandy) Albright of Adrian; 12 grandchildren, Nicole, Darrell, Trent, Andrea, Aaron, Mercedes, Kendra, Isaac, Paige, Brian, and Sheena; 26 great-grandchildren; and his sister, Mary Lou (William) Svoboda of Adrian. He was preceded in death by his parents and his brother, Leonard Albright, Jr. The family will receive friends for visitation on Tuesday, November 2, 2021, from 11:00 a.m. until 1:00 p.m. at the Wagley Funeral Home, Adrian. A funeral service for Eugene will immediately follow at 1:00 p.m. with Pastor Brian Grothe officiating. Services will conclude with burial at Oakwood Cemetery in Adrian. Those planning an expression of sympathy may consider a memorial donation in Eugene’s name be given to the Life House Ministries Church. Online condolences and memories may be shared at www.WagleyFuneralHomes.com.

ADRIAN &#8211; Eugene Albright, age 84, of Adrian, went to be with the Lord in the early morning hours of Saturday, October 30, 2021. He was born on May 7, 1937, in Adrian, a son of Alfred Leonard and Alice (Hunt) Albright. Eugene attended Adrian... View Obituary & Service Information

The family of Eugene Albright created this Life Tributes page to make it easy to share your memories.

Send flowers to the Albright family.