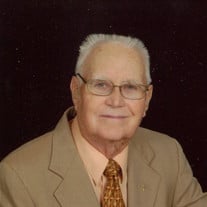 Adrian- Erven John Brieschke, age 93, of Adrian, formerly of Riga, passed away Thursday, June 14, 2018, at Bixby Medical Center with family by his side. He was born August 10, 1924, to Edward and Janira (Kastel) Brieschke in Riga Township. Erven graduated from Blissfield High School in 1942 and went on to attend Michigan State University. With WWII going on, Erven had to leave college and return home to oversee the family farm as his father went to work in a war plant. On September 7, 1969, Erven married Marcella Dauel Filter and they celebrated over 48 years together. Erven helped run the family farm for many years and also worked at the Michigan Elevator Exchange for 24 years. He was a lifetime member of Trinity Lutheran Church in Riga, where he served on the Church Board, sang in the choir and had the role of Sexton and Groundskeeper. Erven volunteered his time as a Boy Scouts leader in the 1940’s, and was the manager of the Babe Ruth League in the 1950’s. Erven and his wife, Marcella, helped organize and direct the “Silvertones Band” for 17 years. Everyone knew that Erven was an avid sports fan and could often be found watching a baseball game on the television with the sound muted and the radio turned up, as he preferred to listen to the radio commentators calling the game. He is survived by his wife, Marcella; sister, Ruth (Wayne) Walters; and many beloved nieces and nephews. Erven was preceded in death by his parents, and siblings, David Brieschke and Mary Ann Nichols. Funeral services for Erven will take place on Monday, June 18, 2018, at 1 p.m. at Trinity Lutheran Church in Riga, with Dianna Raine officiating. Burial will follow at Riga Cemetery. Visitation will take place from 11a.m. until the time of the service at the church. Arrangements have been entrusted to Wagley Funeral Home, Tagsold Chapel, Blissfield. Contributions in memory of Erven may be made to Hospice of Lenawee or Trinity Lutheran Church. Online condolences and memories may be shared at www.wagleyfuneralhomes.com.

Adrian- Erven John Brieschke, age 93, of Adrian, formerly of Riga, passed away Thursday, June 14, 2018, at Bixby Medical Center with family by his side. He was born August 10, 1924, to Edward and Janira (Kastel) Brieschke in Riga Township.... View Obituary & Service Information

The family of Erven John Brieschke created this Life Tributes page to make it easy to share your memories.

Send flowers to the Brieschke family.