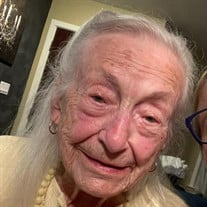 RIGA – Emma A. Soff, 96, of Riga died early Wednesday morning January 5, 2022, at Ebeid Hospice Residence in Sylvania, Ohio surrounded by her family. Born January 3, 1926 in Stamford, Connecticut she was the second youngest of seven children to Joseph and Anna (Masek) Hlavaty. Emma was a proud Stamford High School graduate. She met her future husband, Raymond John Soff, Sr. at a USO dance during World War II, while he was stationed in the United States Navy. On July 2, 1945, they were married in St. Paul, Nebraska and later relocated to Riga, Michigan where they built their farm and made their lives. Together they shared over 55 years of memories and love until he preceded her death 22 years ago to the day - January 5, 2000. A true farmer’s wife, Emma “did it all.” She helped on the farm, was a seamstress, gardener, and cook, but her greatest pride and joy was caring for her children and her home. She was always active. In her spare time, she enjoyed bowling, knitting, playing Bunco, and gambling for fun. She was also a member of the Red Hat Society. Emma is survived by her five children, Sandra (James) Brennan of Bloomfield Hills, MI, Janice (Steven) Smrekar of Petersburg, MI, Charlene (Jay) Hanenkratt of Pettisville, OH, Renee (Robert) Gordon of Blissfield, and Raymond (Robin) Soff, Jr. of Blissfield; 10 grandchildren; and 14 great-grandchildren, with another one on the way. She was the last surviving member of her immediate family. She was preceded in death by her parents; beloved husband, Raymond, Sr.; two sisters; and four brothers. A funeral service for Emma will be held on Monday, January 10, 2022 at 1:00 p.m. at Wagley Funeral Home, Tagsold Chapel, Blissfield with Rev. Larry Betz, officiating. Burial will immediately follow at Riga Cemetery. Visitation will begin at 12:00 p.m. on Monday and continue until the time of the service. The family suggests that memorial contributions to honor Emma be made to Ebeid Hospice or the charity of one’s choice. Online condolences and memories may be shared at www.WagleyFuneralHomes.com.

The family of Emma A. Soff created this Life Tributes page to make it easy to share your memories.

Send flowers to the Soff family.