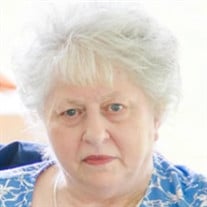 Not sure what to send?

OTTAWA LAKE – Elona Esther Myers, 82, of Ottawa Lake, Michigan died early Thursday morning, June 23, 2022 at Aspen Grove Assisted Living in Lambertville, MI under the compassionate care of ProMedica Hospice. Born December 6, 1939 at her family home in Ottawa Lake, she was the daughter of Earl and Agnes (DeClark) Knoblauch. Elona was a proud graduate of Blissfield High School, class of 1957. Following high school, Elona began working at the Ottawa Lake Co-Op, where she met her future husband. On June 24, 1960 Elona married Russell Clarence Myers in Riga, MI and they were blessed with over 60 years together until he preceded her death just 3 months ago on March 17, 2022. Now they have been reunited in Heaven one day before their 62nd wedding anniversary. Elona was a dedicated mother and homemaker; caring for her five children and helping Russell on their family farm. Elona was a gifted seamstress and baker. She loved hosting get togethers and card parties for her family and friends. In her younger years, Elona loved to dance; she and Russ enjoyed square dancing. In her spare time, she enjoyed the simple pleasures of reading a good book, watching “Gone With The Wind” or a suspense movie, and listening to country music. Elona’s greatest joy in life was spending time with her family. Elona is survived by her children, Luanna Myers, Sherri (David) Jastrzenski, Steven (Hannah) Myers and Debra (Chad) Fredericks; granddaughters, Sydney and Abigail Fredericks; and siblings, Eugene (Patricia) Knoblauch, Bonnie Andrews, and Robert (Carol) Knoblauch. In addition to her parents and beloved husband, Russell, Elona was preceded in death her son, Douglas Russell Myers; sister, Janet Fisher; and her brother-in-law, Harold Andrews. Funeral services will be held on Tuesday, June 28, 2022 at 11:00 a.m. at Wagley Funeral Home, Tagsold Chapel in Blissfield. Burial will follow at Whiteford Union Cemetery. Visitation will take place on Monday from 4-7 p.m. at the funeral home and again on Tuesday from 10:00 a.m. until the start of the service. Memorial contributions may be made to ProMedica Hospice. Online condolences and memories may be shared at www.WagleyFuneralHomes.com.

The family of Elona Esther Myers created this Life Tributes page to make it easy to share your memories.