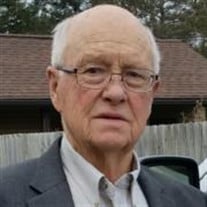 LAMBERTVILLE, MI - Ellis “Richard” Davis, age 83, of Lambertville, Michigan, passed away peacefully on June 14, 2017 at his home in Lambertville, Michigan. He was born in Tremont, Mississippi to Euel Verter and Willie Mae (Maxey) Davis on January 26, 1934. Richard moved to Adrian, Michigan in April 1950 at age 16 and began working as a Welder at Adrian Peerless until 1959. He then worked at Tecumseh Products for a short time before accepting a Foreman position at Stubnitz-Greene Spring, along with working at Bridgeport Brass. During all his full-time jobs, he also found time to work as a mechanic at Jim’s Marathon on the corner of Beecher/Center Street in Adrian. He met the love of his life Joy C. (Harkness) Davis, who was originally from Fayette, Alabama, and the daughter of Fletcher & Athel Harkness. They were married for 61 years before losing her in May of 2015 to a brain aneurism. Joy & Richard married February 1954 and had three children, Cathy Denise, Richard Alan and Lisa Jane. In 1978, Joy & Richard made the move to Tremont, Mississippi where they built a log house on the original Davis homestead located on CottonGin Road. Richard cut pulpwood off their land and then from 1983-1995 worked for the Itawamba County School system at Tremont School. There he was a Bus Driver and provided school maintenance for Tremont and Itawamba College-Tupelo. They resided in Mississippi until 1995 when they surrendered to their children’s wishes and returned north to Toledo, Ohio to be closer to them and grandchildren. In 1999, they relocated to Lambertville, Michigan where they remained until passing. Richard was a zealous man who enjoyed working in automotive, loved auto racing, antiques, auctions, garage sales, country music, driving his truck fast, and reminiscing with his family and friends. He was the go-to person if you needed anything fixed and will be wholeheartedly missed by all that knew him. He is survived by his three children & their spouses, Cathy Keller & David Sadowski, Alan & Heather Davis and Lisa & Ken Krider, his six loving grandchildren, Karen, Jacob, Nicole, Alexa, Chase & Travis, along with their spouses or significant other and eleven great grandchildren, Gabriel, Duncan, Ian, Xander, Ava, Aurora, Phoebe, Roland, Corbin, Gia & Paisley. He is also survived by his three sisters, Nell Lamberson, Mary Ellen Hargett and Carolyn Jane (Norman) Siedel along with seven brothers, Raymond, Carl (Laura), David (Patricia), Patrick (Lauren), Kelly, Larry (Lori) & Danny (Julie) as well as his many loving nieces, nephews, relatives and friends. His beautiful wife, Joy and his parents preceded him in death. The family will receive family and friends on Saturday, June 17 from 12:00 p.m. until 3:00 p.m. with a short funeral service following at 3:30 p.m. at the Wagley Funeral Home located at 1501 W Maumee Street, Adrian, Michigan. Richard is to be cremated and placed beside his beloved wife, Joy. Memorial donations may be made in Richard’s name to the St. Jude’s Children Hospital or a charity of your choice. Online condolences and memories may be shared at www.WagleyFuneralHomes.com.

The family of Ellis "Richard" Davis created this Life Tributes page to make it easy to share your memories.

Send flowers to the Davis family.