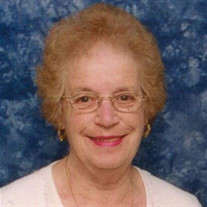 ADRIAN – Elizabeth “Leah” Riley, age 81 of Adrian, passed away Saturday, November 19, 2016 at Gaslight Village Assisted Living. She was born November 20, 1934, in Zuilen, Netherlands, to Govert and Geertrudia (VanDee) Homburg. She graduated from high school and nursing school in the Netherlands where she worked as a nurse. Leah immigrated to the United States at the age of 19, and became a naturalized citizen in 1962. On May 7, 1955, she married Ernest Riley in Nevada, and he preceded her in death in 1985, having celebrated 30 years together. She was a member of Church of Jesus Christ Latter-Day Saints in Adrian. In addition to working at Bixby Hospital for 10 years, Leah also owned a motel at Evans Lake for a short time. She was a life-time member of the DAV Auxiliary, where she served as Past State Department Commander, and received many certificates recognizing her years of volunteer service at the Veterans Hospital in Ann Arbor. In addition to her good friends, David and Gloria Boozer, of Adrian, she is survived by a brother, Nicholas Homburg of Idaho, sister-in-law, Ellen Homburg of Colorado, step-brothers, John (Hedy), David (Lois), Donald, Kenneth (Willa), Daniel, and Keith (Lori) Forche, and many nieces and nephews. In addition to her parents and husband, she was preceded in death by a sister, a brother, and step-son, Jeremy Riley. Funeral services will take place at 11:00 a.m., Wednesday, November 23, 2016 at Wagley Funeral Home in Adrian. Burial will follow at Lenawee Hills Memorial Park. Visitation will be held at the funeral home Tuesday from 4 to 8 p.m., where there will be a DAV service at 7 p.m. Contributions in memory of Leah are suggested to the DAV Auxiliary Lenawee Unit 20. Online condolences and memories may be shared at www.WagleyFuneralHome.com.

The family of Elizabeth "Leah" Riley created this Life Tributes page to make it easy to share your memories.

Send flowers to the Riley family.