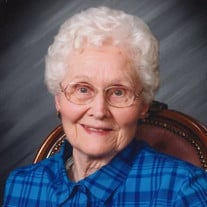 TECUMSEH – Elizabeth Ann Calvin Kershner, 95, passed away peacefully on November 29, 2021 at Cambrian Assisted Living in Tecumseh, with her daughters by her side, after suffering a stroke earlier in the week. Elizabeth was born on March 26, 1926 to Henry and Anna (Forsyth) Silberhorn on the family farm in Riga Township. She married Richard Lewis Calvin on November 28, 1946. Richard preceded her in death on October 17, 1986. She spent her first eight grades in a one room, eight grade school house just a quarter of a mile north of her home. She graduated from Blissfield High School in 1943, as the Valedictorian. Elizabeth moved to Adrian after graduation and worked as a clerk-typist for Schwarze Electric Company. She later worked as a secretary at Commercial Savings Bank, before starting her family. Richard and Elizabeth had eight children: James, Lewis, Linda, Richard, Nancy, Karen, Larry and Gary. She returned to the workforce in 1968, when she took a position as clerk-typist at the Lenawee County Probate Court. When she retired on May 3, 1991, she had worked 23 years in the Probate Court, the last 15 years as Register of Probate. She had served with Probate Judges Maurice Spears, Kenneth B. Glaser, Jr., C. Ralph Kohn and Robert J. Baker. Elizabeth was a long-time member of the V.F.W. Annis-Fint Post 1584 Auxiliary. She served as trustee, secretary, treasurer and president over the years, as well as Chairman of various projects. One of her favorites was the Voice of Democracy Essay/Script writing contest for high school students. Richard and Elizabeth owned property on Fletcher’s Pond in Montmorency County, where they enjoyed many memorable vacations fishing and relaxing. After Richard passed, Elizabeth continued to take her grandchildren with her, where they spent many happy hours fishing and, in the evening, traveling the country roads, watching for deer coming out to graze in the alfalfa fields. Elizabeth married James Kershner on October 16, 1994. She learned to square dance and made many new friends while married to Jim. Jim passed away October 3, 2013. In 2015, Elizabeth started writing histories. The first book was titled “My Memoirs, History and More,” followed by “The History of Post 1584 Veterans of Foreign Wars and Auxiliary,” and most recently, “The Calvin Family History.” In addition to her two husbands, Elizabeth was preceded in death by her parents, her sister, Doris Zinn, her brother, Dennis Silberhorn, a daughter in infancy, Nancy, and her sons, James, Lewis, Larry and Gary Calvin. She was also preceded in death by her daughter-in-law, Kathy Calvin, and her grandsons, Matthew and Kevin Lips, and her grandson-in-law, Jon Rodgers. She is survived by her children, Linda (Dave) Lips, Richard (Linda) Calvin, and Karen (Doug) Witt, along with daughters-in-law, Jill Calvin and Jody Calvin. Her surviving grandchildren are Crystal Rush, Rodney Calvin, Craig (Sheila) Calvin, Lewis (Mandy) Calvin, Jr., Brandy Rodgers, Brian (Marybeth) Lips, Doug Calvin, Erin (Gary) Ball, Trent (Jessica) Calvin, Jennifer (Scott) Paulson, Rick (Beth) Calvin, Lucas (Sarah) Witt, Connor Witt, Jared Witt, Melissa Dunbar, and Danielle Trejo. Also surviving are 22 great-grandchildren and 2 great-great-grandchildren, her sister, Lois Bailey, nieces and nephews, and her step-children, Terry (Marsha) Kershner, Gary (Cathy) Kershner, Kathy Lauer, and Christine Studnicka, and her sisters-in-law, Hazel Jacobs and Evelyn Dressler. Contributions in her memory may be made to the First Christian Church Disciples of Christ on Bent Oak Highway in Adrian or to Hospice of Lenawee in Adrian. Elizabeth’s children would like to say that their mother received the most compassionate and loving care that was possible, from the staff at Cambrian Assisted Living and Hospice of Lenawee. To this they owe them their utmost gratitude. Funeral services for Elizabeth will take place on Friday, December 3, 2021 at 12:00 p.m. at Wagley Funeral Home in Adrian with Pastor Linda Farley officiating. Visitation will begin at 10:00 a.m. on Friday and continue until the time of the service. Those attending services should please wear a mask. A live streaming of the service will be accessible from Elizabeth’s tribute wall on www.WagleyFuneralHomes.com where a link to view the recording will be available for 90 days. Private family burial will take place at Oakwood Cemetery. Online condolences and memories may be shared at www.WagleyFuneralHomes.com.

TECUMSEH &#8211; Elizabeth Ann Calvin Kershner, 95, passed away peacefully on November 29, 2021 at Cambrian Assisted Living in Tecumseh, with her daughters by her side, after suffering a stroke earlier in the week. Elizabeth was born on March... View Obituary & Service Information

The family of Elizabeth Ann Calvin Kershner created this Life Tributes page to make it easy to share your memories.