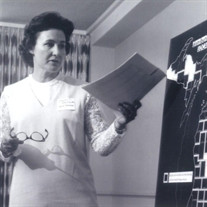 TECUMSEH - Eleanor May Parshall, physician, wife, mother, and grandmother, but most of all friend to all who knew her, departed for her last outing on Saturday September 5, 2020, at Cambrian Memory Care where she had been a resident since 2017. Eleanor lived 94 wonderful years. Eleanor was born on July 11, 1926 in Detroit, Michigan, the daughter of Theron E. Parshall and Agnes Marie Parshall (Barron), and oldest sibling of sisters Dorothy Dalton, Marian Ellis, Donald (Evelyn) Parshall, Samuel (Evelynne) Parshall, Helen (Art) Given, and Irene Gaylord. Eleanor was raised in Detroit, graduating as her senior class valedictorian from Cooley High School. She attended Wayne State University for her undergraduate degree and then transferred to the University of Michigan where she completed her medical degree. On June 13, 1953, she graduated medical school and married her fellow graduating medical school classmate Xenophon Skufis. After completing three years of post-graduate education, the couple moved to Adrian, Michigan to set up medical practice and start a family. Eleanor established a successful family practice and was well-known in the Michigan medical community as an adept diagnostician. She left family practice in the late 1950’s to become Medical Director of the Lenawee County Health Department where she served until 1965. Her tenure was marked by dramatic improvements in water sanitation and health screening throughout the county, and Eleanor was the behind-the-scenes force to institute health education in Michigan public schools. She briefly left practice to take care of her children through their grade-school years, then returned to medicine as the Medical Director of General Motor’s Fisher Body plant in Tecumseh, Michigan, becoming the first woman physician employed by GM. When the Fisher Body plant closed in 1988, Eleanor became Medical Director for Hospice of Lenawee. In addition, she practiced industrial medicine in Adrian alongside Dr. David Sarapo. Eleanor continued her medical practice through Hospice of Lenawee until 2008, retiring at age 82. Eleanor will be remembered for her love of family, her devotion to the practice of medicine, and her kindness and support of those in need. Many relied on her for her sound medical advice. She is preceded in death by her husband of 67 year, Xen, her parents, her brothers Don and Sam, and her sisters Dorothy and Irene. She is survived by two sisters, three children (Renee [Jack] Gregory, Paul [Leslie] Skufis, and Jim [Barbara] Skufis), five grandchildren (Charlie, Matthew, Sarah, Neil, and Paula), eight great-grandchildren (Chas, Carter, Evan, Lev, Callen, Natan, Julia, and Gadi), plus numerous nieces, nephews, and their children. Eleanor’s family will receive guests for visitation and viewing on Thursday, September 10, 2020, from Noon until 2:00 p.m. at the Wagley Funeral Home in Adrian. A private burial will follow at Lenawee Hills Memorial Park in Adrian. Please be mindful of the restriction of no more than 10 people at a time for viewing due to Covid-19. Following the Governor’s executive order, all attendees are required to wear a proper face covering, with the exception of those under the age of five years old or those who cannot medically tolerate. In lieu of flowers, the family requests that donations be made to Hospice of Lenawee in Eleanor’s name. Eleanor’s family would like to express their gratitude to Elara Caring Hospice for their compassionate care of Mom in her final months, and to the staff of Cambrian Memory Care for the outstanding care they delivered to Mom during the years she was a resident. Your love and friendship to our Mom did not go unnoticed. Online memories and condolences may be shared at www.WagleyFuneralHomes.com

TECUMSEH - Eleanor May Parshall, physician, wife, mother, and grandmother, but most of all friend to all who knew her, departed for her last outing on Saturday September 5, 2020, at Cambrian Memory Care where she had been a resident since 2017.... View Obituary & Service Information

The family of Dr. Eleanor May Parshall M.D. created this Life Tributes page to make it easy to share your memories.

Send flowers to the Parshall family.