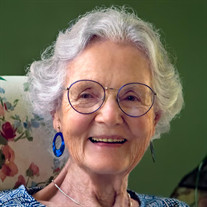 ADRIAN – Eleanor Mae Hunt, “Maizie”, wife of the late Richard G. Hunt, passed away on Sunday, March, 12, 2017, after a brief illness. Maizie was born March 30, 1924, in Chicago, Illinois, to Arthur and Katherine (Killoren) Hewitt and moved to Adrian, Michigan when she was five years old. On October 9, 1942, Maizie married Richard Hunt in Adrian. He preceded her in death in May of 2004, having celebrated over 61 years together. Maizie was a member of Christ Episcopal Church. She was a long term member of Kappa Kappa Epsilon where she had a fondness for participating in the sorority’s programs to buy books, shoes and boots for children in Adrian. In earlier years she was involved in the Associated Charities organization. Maizie was an avid golfer who also loved to play bridge, sew, and solve crossword puzzles. Her knowlege of birds and their songs was shared with her children and grandchildren, who now engage in birdwatching. However, Maizie’s greatest passion remained raising her children and encouraging them in school and extracurricular activities. Maizie is survived by her children, Dr. Susan E. Hunt and her husband, Jonathan Rutschky, and Steven A. Hunt and his wife, Lynne, daughter-in-law, Diane Garrison Hunt; five grandchildren, Richard G. Hunt, III, Katherine Hunt Patrykus, Justin E. Hunt, Lauren E. Hunt, and Jonathan Hunt Rutschky. Her great grandchildren are Aaron and Eli Hunt, Rachel and Andrew Patrykus, and Leo Stevens Hunt. Maizie has one surviving brother, Dr. Thomas Hewitt and his wife, Sheri. In addition to her husband Richard, Maizie was preceded in death by her grandson Steven T. Hunt, her son Dr. Richard Hunt, II, and her sister Betty Ann Hodges. A memorial gathering of family and friends will take place from 1:00 to 3:00 p.m., Thursday, March 23, 2017 at Wagley Funeral Home. In lieu of flowers, the family has requested contributions in Maizie’s name be made to the Adrian Public Library for the children’s department. Online condolences and memories may be shared at www.WagleyFuneralHome.com.

The family of Eleanor "Maizie" Hunt created this Life Tributes page to make it easy to share your memories.