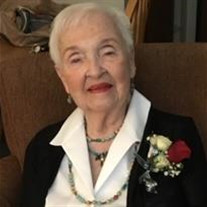 ADRIAN- Edwina Brown, 93, of Saline, formerly of Adrian, died Friday, November 15, 2019, at the Evangelical Home in Saline. She was born July 10, 1926, in Swanton, OH, the daughter of the late Alfred and Londa (Brindley) Judson. Edwina graduated from Swanton High School with the Class of 1944. She moved to Adrian in 1952 and worked at Stubnitz-Green. Edwina was the first female dispatcher in Lenawee County. She worked for the City of Adrian Police Department and retired after 30 years of service. She was affectionately known as “Brownie” by all of her co-workers. She was a sports enthusiast who enjoyed watching the Tigers and Red Wings in action. Edwina’s favorite pastime was attending her grandchildren’s activities. No sporting event was too far away and she was their biggest fan in the bleachers. Edwina was married to Ronald Bloom and they had two daughters during their marriage. She later married Jack Brown and they were just shy of celebrating 50 years together before his death in 2002. She is survived by her children, Roxan Elliott of Saline, Gordon Brown of Hudson, Sara (Kristen) Brown of Kenmore, NY and Andrea (Jeffrey) Williams of Bluffton, SC; grandchildren, Aaron, Adam, Jeremy, Amber, Brandon and Makenzie; 5 great-grandchildren and a brother, Warren (Norma) Judson of Somerset. She was preceded in death by her parents; husbands, Ronald and Jack; daughter, Melissa and sister, Barbara (Judson) Savinatink. At Edwina’s request, cremation will take place with no public service. A private burial will take place at Oakwood Cemetery. Memorial contributions may be made to the Adrian Salvation Army or the Parkinson’s Foundation. Online condolences and memories may be shared at www.WagleyFuneralHomes.com.

ADRIAN- Edwina Brown, 93, of Saline, formerly of Adrian, died Friday, November 15, 2019, at the Evangelical Home in Saline. She was born July 10, 1926, in Swanton, OH, the daughter of the late Alfred and Londa (Brindley) Judson. Edwina graduated... View Obituary & Service Information

The family of Edwina Brown created this Life Tributes page to make it easy to share your memories.