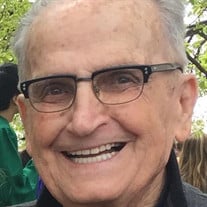 ADRIAN- Edwin “Eddy” Balasz, age 88, of Adrian, MI passed away peacefully Friday, December 14th, 2018. Eddy was born in Bessemer, MI on October 26th, 1930 to Julia and Steve Balasz. He was one of six children that have all gone before him. Eddy graduated from Bessemer High School in 1948, lettering in four sports. He headed for the Navy, while his future bride, Mary Lou Shogren, pursued nursing school in Chicago. While in the Navy, Eddy visited both Greece and Italy. Eddy and Mary Lou married June 6th, 1953. They made their home in married housing at Michigan State University while Eddy pursued a Chemistry and Physics degree. After graduation Eddy taught high school in Ironwood before starting a career with AT&T as a computer engineer and software designer. The family moved many times during those years living in Massachusetts, Duluth, Colorado and Chicago. In an effort to establish a permanent family home Eddy took a job in Adrian, Michigan as the Data Processing manager for the Intermediate School District. When Eddy started with the district the computer that he worked on was the size of a small utility shed. During these busy years Eddy and Mary Lou raised three wonderful children. Jody has worked in accounting and lives in New Jersey. Jay is a dentist and lives in Charlevoix with his wife Kris. Jerry works in landscaping and lives in Adrian. Eddy and Mary Lou are also the proud grandparents of Jody’s son Eric Sydow, Jay’s children, Sam, Jane and Grace along with Jerry’s kids, Sarah and Jack. Funeral services for Eddy will take place on Friday, December 21, 2018, at 11:00 a.m. at Christ the Redeemer Lutheran Church in Adrian with Pastor Denise Benjamin officiating. Per Eddy’s wishes, cremation will follow. Visitation will be on Thursday, December 20, 2018, at Wagley Funeral Home from 4 to 7 p.m. Memorial contributions may be made in Eddy’s honor to Christ the Redeemer Lutheran Church or Hospice of Lenawee. Online condolences and memories may be shared at www.wagleyfuneralhomes.com.

The family of Edwin "Eddy" Balasz created this Life Tributes page to make it easy to share your memories.

Send flowers to the Balasz family.