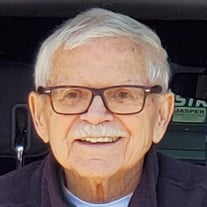 BLISSFIELD- Edward T. “Ed” Wilkie, 85, went to his eternal home Wednesday, December 30, 2020, comfortable at his home with his family by his side. He was born April 7, 1935 in Gaylord, Michigan to Ralph H. and Rose E. (Lozon) Wilkie. He graduated from Gaylord High School in 1953. Ed married Judy Kordt in Wadsworth, Illinois on August 28, 1964 and she survives. Being trained in agriculture through a short course at Michigan State University, some of Ed’s fondest memories centered around working in the cattle barns at the University. It prompted him to join the Army where he served in the Veterinary Division and served overseas in Metz, France. Ed’s early career was as a herdsman for several pure-bred cattle farms including Temple Smith Farms in Wadsworth, Illinois and Kitty Kurtis Farms in Tecumseh, Michigan. He then worked at the Blissfield Co-Op and sold feed for Farm Bureau Services. He finished his working days at General Motors, first in Adrian and then Toledo. Ed was a public servant in many ways during his life. He was a member of the Lenawee County Fair Board and Junior Livestock Association where he was treasurer. Ed was a volunteer fireman and EMT on Blissfield Fire Department for 32 years, retiring in 2002. He was a Boy Scout leader for 40 years helping many young men obtain their Eagle status. He was awarded the Silver Beaver and God and Country Award for his service to Scouts, God and Country. As a faithful member of the Blissfield First United Methodist Church, he served as a trustee. Also, as a longtime member of the Blissfield Rotary Club, he achieved Paul Harris status at the Sapphire Level and gave Paul Harris recognition to his family as gifts. He was president of the club in the early 1980s and was a champion for local participation in the Rotary International goal to help eradicate polio worldwide. So committed to Rotary, he was dedicated to the Club’s many fundraisers, especially enjoying the Harley Motorcycle raffles, and participated up until his passing in this year’s Christmas fundraiser. Ed loved hunting with his family for more than 40 years at their “deer woods” in Mecosta County and enjoyed other hunting trips. In addition to his wife Judy, of 56 years, Ed is survived by daughters Lisa (Kevin) Neuman, Adrian; Mike (Melanee) Wilkie, Britton; and Diana (Richard) Medley, Blissfield. He is also survived by son Marcelo Godke Veiga, of Sao Paulo, Brazil, hosted as an exchange student in 1991; eight grandchildren William (Mollie) Delzeith, Lauren (Christopher) Polzin, Liam, Skye and Genevieve Wilkie, Hailie and Isabelle Medley and two great-grandchildren, Eleanor and Jack Delzeith. Also surviving are brothers Wendell (Loretta) Wilkie, James (Linda) Wilkie and Douglas Wilkie; sisters Marilyn Edgerly and Elizabeth Duczkowski; brothers-in-law James Sabo and Jack (Sharon) Kordt; sisters-in-law Sharilyn Wilkie and Janet Wilkie; and many nieces, nephews and cousins. Preceding Edward in death were his parents Ralph and Rose Wilkie; grandson Thomas Delzeith; brothers Raymond Wilkie and Ralph Wilkie; sister and brother-in-law Donna and Dean Moeckel; sister Carolyn Sabo; and brothers-in-law Bob Duczkowski and Greg Edgerley. As he wished, cremation has taken place. Visitation will be held Saturday, May 1, 2021, from 11:00 a.m. until 1:00 p.m. at the Wagley Funeral Home, Tagsold Chapel in Blissfield. A memorial service will immediately follow at 1:00 p.m. with Rev. Gunsoo Jung and Mr. Mike Sheldon officiating. Military Rites will be provided by the Blissfield American Legion Post #325 and VFW Post #158. A live streaming of the service will be accessible from Ed's tribute wall on www.WagleyFuneralHomes.com, where a link to view the recording will be available for 90 days. Gifts in his memory may be given to First United Methodist Church of Blissfield. Please remember him as you knew him and know that he considered all he knew to be special to him. The family would like to express their sincere appreciation to Hospice of Lenawee for their guidance and care during the last several weeks. Arrangements have been entrusted to Wagley Funeral Home, Tagsold Chapel, Blissfield, where online memories and condolences may be shared at www.WagleyFuneralHomes.com

The family of Edward T. "Ed" Wilkie created this Life Tributes page to make it easy to share your memories.

Send flowers to the Wilkie family.