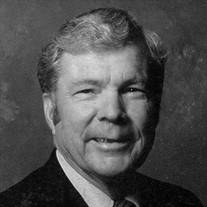 PALMYRA TOWNSHIP– Edward “Ed” Moran of Palmyra, Michigan, passed away July 31, 2018 at the Hospice of Lenawee Home. Ed was born July 14, 1925, in Continental, Ohio to Edward Patrick and Myrtle Alice (Snyder) Moran, the 13th of 14 children. He graduated from Continental High School. He first started earning money as a teenager by trapping muskrat/mink with his good friend Bob Woolam in Continental. He then went on to work for the Ohio Turnpike briefly as well as his sister Mildred’s hamburger shop in Dayton, Ohio. He was part owner of The Rail Bar in Walbridge, Ohio and was licensed in Ohio and Michigan as a contractor in home remodeling and real estate. He started Continental Construction Company in 1961 until 2007 when he retired. Known as a salesman extraordinaire, he won a trip in 1955 to NYC and Yankee Stadium to watch Archie Moore vs. Rocky Marciano, as well as trips to Aruba and Hawaii. While working at Electric Auto Light he met Marilyn Wilt, whom he married July 31, 1953 in Blissfield, Michigan. Ed was a lifelong fan of the Detroit Tigers and University of Michigan football, an avid gardener, and he loved to cook and bake. Ed is survived by his sons, Edward Carl (Lorraine) of Toledo, Patrick Lee of Palmyra, Brian Scott (Regina) of Sandusky, Michigan, Timothy Moran of Orlando, Florida, and step-son Larry Edward (Gail) Ash of Tecumseh. Also surviving are numerous grandchildren including great and great great grandchildren as well as many nieces, nephews and their families. He was preceded in death by his wife of 55 years, Marilyn, and children, step-son David Paul Steffen, sons, Michael Jeffery and Sean William Moran, daughter, Kelley Irene Moran, and his grandson, Lon Robert Jemma. He was also preceded in death by all of his siblings, Leona Pearl Barnes, Irene May Shank, twins, Ray and Earl who died very young, Ilo Susan Dunsmore, Leon Benjamin, Virgil Dwight, Margery Evelyn Horner, Robert Wilson, Mildred Mary Lehman, Doris Helen Johnson, Winona June Brown and Dale Dean, who also died very young. Friends and family will be received at the family homestead, 4923 E. Carleton Road, Adrian, Michigan for a Celebration of Life on Sunday, August 5, 2018 at 2 p.m. Memorial contributions are suggested to Hospice of Lenawee. Arrangements have been entrusted to Wagley Funeral Home, Tagsold Chapel where online condolences and memories may be shared at www.WagleyFuneralHomes.com.

The family of Edward Moran created this Life Tributes page to make it easy to share your memories.

Send flowers to the Moran family.