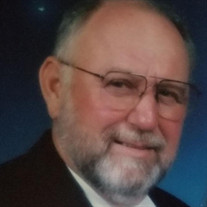 TIPTON –Edward “Ed” George Deck age 84, of Tipton, died on Monday, September 6, 2021 at home under the care of Hospice of Lenawee and with his loving family by his side. He was born at home on October 24, 1936 to Edward G. and Frances (Fenton) Deck in Detroit, MI. Ed graduated from Dearborn High School in 1954. On August 15, 1975 he married Jennifer Matthews in Taylor, MI and they have shared 46 wonderful years together. After graduation, Ed went to work as a machinist at J.K. Schmidt, from there he became a certified Chevrolet mechanic for Corvettes and large trucks. He also earned his certification for heavy equipment and cement truck mechanic, working at the Wyandotte Gravel Pit. Ed made a career change going into the field of heating and cooling; and owned Ed’s Mobile Home Service and Supply from 1966 to 1997 when he retired. He enjoyed hunting, fishing, and shooting skeet, trap and sporting clays. When he was younger, Ed was a skilled Go-Kart racer and placed second in the World in 1972 in the Heavy Weight Class. He shared his love of driving with his family where they participated in Drag Racing. Ed had a way of making everything look easy where he was involved. In addition to his wife, Jennifer, Ed is survived by his sons, Edward Alden Deck and Mitchell “Eric” (Nicole) Deck; grandchildren, Elizabeth, Mitchell and Nicolas Deck; and sister, Mary Lou (Dr. Timothy) Schubert. He was preceded in death by his parents and sister, Dorothy Williams. At Ed’s request, cremation will take place with no public services. Memorial contributions may be made to Hospice of Lenawee. Arrangements have been entrusted to Wagley Funeral Home, in Adrian. Online condolences and memories may be shared at www.WagleyFuneralHomes.com

The family of Edward "Ed" George Deck created this Life Tributes page to make it easy to share your memories.

Send flowers to the Deck family.