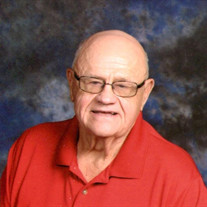 BLISSFIELD – Edward James “Duke” Burgermeister, age 88, of rural Blissfield, died Friday, September 27, 2019, at Blissfield Place. He was born April 25, 1931, in Riga Township, MI, to the late Edward and Helen (Pflum) Burgermeister. Duke was a 1950 graduate of Blissfield High School, where he excelled at sports and was inducted to its Hall of Fame. He was a proud member of the Sugar Boys and even tried out for the Detroit Tigers. He later served Lenawee County for 25 years as a referee for high school basketball and football, and coached little league in Blissfield, where he again was recognized in its Hall of Fame. He married the former Verlinda Ford on August 11, 1951, and they became loving parents to two children. She preceded him in death on July 4, 1972. Catholic by faith, Duke was a lifelong parishioner of Light of Christ Parish, St. Peter the Apostle Church. He worked primarily as a farmer, but also was employed for over 25 years at the former RevCo, and several other factories after its closing. He was proud to serve a short tenure as a member of the Palmyra Fire Department. Duke was able to find love again, and married Carol Crunkilton on November 17, 1974, at St. Peter the Apostle Church in Blissfield. They were blessed to spend over 25 winters together in Sebring, Florida. In his later years, he especially enjoyed making memories with his beloved great-grandchildren. Surviving in addition to his wife of over 46 years, Carol, are a daughter, Sally (David) Fritz of Blissfield; a sister, Rosemary (Larry) Truckor;; grandchildren, Steven (Amanda) Burgermeister of Adrian, Deatra (Nick) Nieman and Heather (Ryan) Walentowski all of Blissfield; step-grandson, Kyle (Nicole) Cheney of Blissfield; six great-grandchildren, Kenley and Braxton Burgermeister, Grace and Wyatt Neiman, and Landen and Brayden Walentowski; two step great-grandchildren, Jonathan and Hannah Cheney; and daughter-in-law, Jeanne Burgermeister of Blissfield. Preceding him in death were his parents; first wife, Verlinda; his son, Mark Burgermeister; and his three brothers, John, Ray, and Robert Burgermeister. The family will receive friends for visitation on Sunday, September 29, 2019, from 1-8 p.m. at Wagley Funeral Home, Tagsold Chapel, Blissfield, with a vigil prayer service at 7:00 p.m. Visitation will continue on Monday, from 10:00 – 10:45 a.m. at Light of Christ Parish, St. Peter the Apostle Church. A Mass of Resurrection for the soul of Edward will begin Monday, September 30, at 11:00 a.m., at the church with Rev. Jeffrey Poll as Celebrant. Rite of Committal will follow in Pleasant View Cemetery in Blissfield. Memorial contributions in Edward’s memory are suggested to Careline Health Group. Online condolences and memories may be shared at www.WagleyFuneralHomes.com.

The family of Edward James "Duke" Burgermeister created this Life Tributes page to make it easy to share your memories.