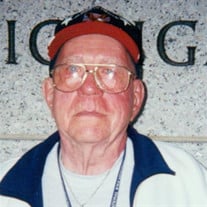 ADRIAN – Edward E. Beavers, age 93 of Adrian, passed away Thursday, August 8, 2019, at his home. He was born October 26, 1925, in St. George, West Virginia, the only son of James and Dove (Ashby) Beavers. During World War II, he proudly served in the United States Army. On September 19, 1953, he married Marian Moran, in Angola, Indiana, and she preceded him in death in 1993, after celebrating over 40 years of marriage. Ed worked for Gerity for several years before going to work for Universal Die Cast in Saline where he retired with 27 years of service. He was a member of the VFW Annis-Fint Post #1584 as well as the DAV Lenawee Chapter #20. He is survived by great nieces and nephews including his caregiver, Brandi (Jay) Bates of Clinton, Brian Johnson, Adrian; Heidi (Roger) Yatzek of Palmyra and Roderick Merrick of Adrian; great great nieces, Angeline (Kyle) Pratt, Madison Young and Mackenzie Schuch, great great nephew Christian Austin, and the youngest members of the family who brought him great joy, three great great great nephews and 1 great great great niece. In addition to his wife, he was preceded in death by his only child, Edward Beaver in infancy; his sister Velma Barron; nieces Tina Johnson and Sherry Merrick and nephew Joseph Barron. Visitation will take place from Thursday, August 15, 2019, at 11 a.m. to 12:30 p.m. at Wagley Funeral Home in Adrian, followed by a procession to Fairfield Cemetery for a graveside service at 1 p.m. Full military honors will be conducted by VFW Annis-Fint Post #1584 and American Legion Post #97. Share online condolences and memories at www.WagleyFuneralHomes.com.

The family of Edward E. Beavers created this Life Tributes page to make it easy to share your memories.

Send flowers to the Beavers family.