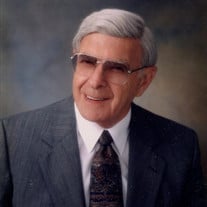 ADRIAN—Edmund Carleton Burkey, 96, of Adrian, went to be with his Lord and Savior on Monday, April 03, 2017 under the loving care of the Hospice of Lenawee Home. Ed and his twin sister, Eleanor were born on July 2, 1920 in Tomah, Wisconsin to Francis Ebersole Burkey and Fred Noah Burkey. Ed spent his early years outside of Chicago in Oak Park, Illinois where he attended grade school. He attended high school in Chicago at the Evangelical Free Church Academy. In April of 1942, Ed was united in marriage to the former Jean Scott of Chicago. He entered Northern Baptist Theological Seminary in the fall of 1942. He took additional course work from the University of Missouri and LaSalle-Peru College. He was a 1951 graduate of Monmouth College, Monmouth, Ill. with an A.B. degree Cum Laude. He was also a graduate of Winona Lake School of Theology, Winona Lake, Indiana with an M.A. degree in Theology. Ed began his preaching ministry in 1944 in the Church of the United Brethren in Christ, at Van Orin, Ill. He also served the community in the capacity of school teacher and principal. In 1951 he was called to the pastorate of College Park Church in Huntington, Indiana. During his pastorate there, the church went through two major building programs. He spent a lot of time counseling college students at Huntington College. In June of 1966, a call was received to the First United Brethren Church in Adrian, MI. Within a year, a building program was inaugurated and the new facility was dedicated in 1969 as Trenton Hills United Brethren Church. Ed served the United Brethren Church in many capacities. He was Senior Superintendent of North Ohio Conference, Conference Superintendent, District Leader, Conference Secretary of Education, Secretary of Church Extension, and Secretary of Conference Council of Administration. In 1973 an honorary doctorate degree was bestowed on him by Huntington College for his contributions to the United Brethren denomination. In 1979, Ed became pastor of the Fellowship Bible Church in Adrian where he preached until he retired in 1993. Ed is survived by son David L. Burkey and his wife Linda of Traverse City, MI., daughter Pamela S. Swenor and her husband Richard of Charlevoix, Mi., his loving grandchildren; Brant W. Burkey of Seal Beach, CA., Jennifer J. Spiller (Dave) of Elk Rapids, MI., Juli D. Tripicchio (Tino) of Battle Creek, Kati S. Rafacz (Ryan) of Murfreesboro, TN., Krista G. Brennfoerder (Nick) of South Elgin, Ill., and Daniel R. Swenor of Traverse City, MI. He is also survived by nine great-grandchildren; Jonah, Ilah, Miles, Naelina, Crosby, Eve, Jude, Maisy, and Evangeline. He is also survived by a church family, that he greatly loved and cherished. The family would also like to thank Joan Sullins, his caregiver, for her loving care of Edmund. He was preceded in death by the love of his life, Jean Burkey, his mother and father, Francis and Fred Burkey, and his twin sister, Eleanor Engel. Visitation for Ed will be on Thursday, April 6, 2017 at the Wagley Funeral Home in Adrian, MI. from 9-11 A.M. The funeral service will follow at 11 A.M. at the funeral home, with the Reverend Kent Maxwell officiating. Burial will follow at Raisin Valley Cemetery. The family suggests memorial contributions be made to The Fellowship Bible Church or The Hospice of Lenawee Home. Online condolences and memories may be shared at www.WagleyFuneralHome.com

ADRIAN&#8212;Edmund Carleton Burkey, 96, of Adrian, went to be with his Lord and Savior on Monday, April 03, 2017 under the loving care of the Hospice of Lenawee Home. Ed and his twin sister, Eleanor were born on July 2, 1920 in Tomah, Wisconsin... View Obituary & Service Information

The family of Rev. Dr. Edmund C. Burkey created this Life Tributes page to make it easy to share your memories.

ADRIAN—Edmund Carleton Burkey, 96, of Adrian, went to be with...

Send flowers to the Burkey family.