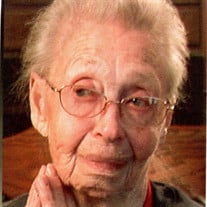 BLISSFIELD – Edith M. Shirley, age 95 of Blissfield, passed away Sunday, February 5, 2017, at her home. She was born April 14, 1921, in Stockbridge, Michigan, to William and Mary (Haskill) Coleman. On July 1, 1939, she married Roscoe Shirley in Howell, Michigan, and he preceded her in death in 1985 having shared 46 years together. Edith devoted herself to her family. She was known for her big heart and opening her home to a multitude of children she raised as her own. She is survived by her children: Sharon (Jerry) Hanson and Eleanor (Wayne) Baker, both of Tecumseh and William (Donna) Coleman of Deerfield; eight grandchildren: Jackie (Tom) Mackey of Palmyra, Rebecca Shirley of Coldwater, Michelle Francoeur and Craig (Paula) Shirley, both of Adrian, Kari Betz of Toledo, Angie (Ken) Pixley of Byhalia, MS, Ida Valdez of Hillsdale and Jody (Teri) Baker of Adrian; as well as numerous great and great great grandchildren. In addition to her parents and husband, she was preceded in death by her son, Roscoe Shirley; daughter, Violet Sayers; son-in-law, Glenn Baker, daughter-in-law, Sylvia Shirley; and siblings: Fern Wright, Gladys Corwin, Bertha Hodge, and John, William and Archie Coleman. Funeral services will take place Saturday, February 11, 2017, at 11:00 a.m. at Wagley Funeral Home, Tagsold Chapel in Blissfield, with Rev. Eric Hickman officiating. Burial will follow at Deerfield Cemetery. Visitation will be held at the funeral home Friday from 2:00 to 8:00 p.m. Contributions in memory of Edith are suggested to Great Lakes Hospice. Online condolences and memories may be shared at www.WagleyFuneralHomes.com.

The family of Edith M. Shirley created this Life Tributes page to make it easy to share your memories.

Send flowers to the Shirley family.