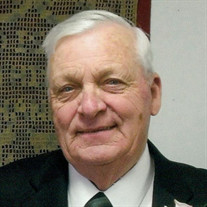 PALMYRA – Edd C. Keck, age 82 of Palmyra, passed away Tuesday, November 19, 2019, at Flower Hospital. He was born November 21, 1936, in Gray, Kentucky, the oldest child of Evy and Ada (Helton) Keck. In 1956 he married Nancy Hohfeldt in Detroit, and she preceded him in death in 2006. Edd was a hard-worker his entire life. For 27 years he was employed by Hughes Chemical, now PPG and simultaneously started his own company, C & J Pallets, Inc. where he was still working. Edd was an avid vegetable and flower gardener and was involved in the Lenawee Traffic Club. Survivors include his children: Glenn Keck, Cheryl (Mark) Roe and Randy Keck, all of Clayton; siblings: John Bill (Gloria) Keck, Frances (Jerry) Chadwell and Jan (Harold) Huddleston, all of Corbin, KY; grandchildren: Amanda (Josh) Butz, Tracie (Josh) Hinzman, Andrew Rittenhouse, Amber (Josh) Griffith and Gavin Keck; eight great grandchildren; and his good friend Karen Schultz of Palmyra. In addition to his wife, he was preceded in death by a daughter-in-law Shally Zorn Keck. Funeral services will take place at 11 a.m., Saturday, November 23, 2019, at Wagley Funeral Home with his nephew Jeffrey Keck officiating. Burial will follow at Palmyra Cemetery. Visitation will be held at the funeral home Friday from 2 to 4 p.m. and 6 to 8 p.m. Contributions in memory of Edd are suggested to St. Jude Children’s Research Hospital or Boys Town. Online condolences and memories are welcome at www.WagleyFuneralHomes.com.

The family of Edd C. Keck created this Life Tributes page to make it easy to share your memories.

Send flowers to the Keck family.