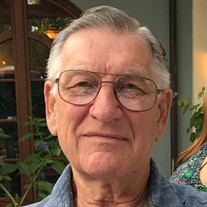 Modesto, CA-It is with profound sadness that the family of Dwight Nelson Klump, D.D.S. announces his passing on July 21, 2019, at the age of 81. He will be immeasurably missed by his family. Dwight was born July 4, 1938 in Ogden Center, Michigan to Nelson and Mary (Miller) Klump and passed away on July 21, 2019 in Modesto, California. He is survived by his wife of 60 years, Carolyn (Hull) Klump; his children Kirsten Klump of Durham, North Carolina, Bradley Klump (Kathleen) of Escalon, California; grandchildren, Emerson and Evan Klump of Escalon, California; and his twin sister Delight (Klump) Romsek of Fowlerville, Michigan and many loved nieces, nephews and extended family members. He is preceded in death by his parents, his sister Donna (Klump) Billings; and brothers, Arnold Klump, and Wayne Klump. Dwight was always generous with his time and talents and had a passion and zest for life, which he exhibited through his many activities in the Blissfield community and beyond. During his tenure at Blissfield High School, he was an accomplished athlete lettering in all four sports and graduating in 1956. He then attended Heidleberg University in Tiffin, Ohio where he was an award winning pole vaulter. He then graduated from the University of Michigan Dental School in 1964. Following his dental school graduation, he served for two years as a Captain in the Army Dental Corp in Bad Kreuznach, Germany. Upon return from military service in 1966, he and Carolyn made their home in Blissfield where he had a private Dental Practice for 41 years. Community service was important to him. He served on the Blissfield State Bank Board of Directors, the Blissfield School Board of Education, and as Trustee for the Village of Blissfield. In addition, he served in various leadership capacities in the Rotary Club and the Blissfield First United Methodist Church. Dwight was the epitome of the saying “you can take the boy out of the country, but you can’t take the country out of the boy.” After several years of living in Blissfield, he moved with his wife and children back to his roots in Ogden Center. Throughout his life, he enjoyed farming, raising Arabian horses, and later growing walnuts. In 2007 he and Carolyn sold their private practice in Blissfield and moved to California to be near their grandkids. He continued to utilize his dental skills at a clinic in Sonora, California for 11 more years. Finally, retiring at age 79! He loved his profession and helping others. Family was everything to Dwight and he cherished the memories of watching his grandkids grow up. He was always in attendance at their sporting or school activities. He was a proud grandfather and looked forward to their future accomplishments. Dwight took many trips with his family over the years including Hawaii, Disney World and around his beloved state of Michigan. After moving to California, Dwight and Carolyn took trips to wine country where he could appreciate a glass or two of red wine. Dwight was an avid college sports fan and could be found watching and cheering on his U of M team. Tailgating often accompanied sporting events and Dwight was known as a wonderful grill master. Funeral services for Dwight will be on Saturday, July 27, 2019, at 1 p.m. at Wagley Funeral Home Tagsold Chapel, in Blissfield with Rev. Dean Klump officiating. Burial will follow at Pleasant View Cemetery. Visitation will be held on Friday, July 26, 2019, from 4-8 p.m. at the funeral home. In lieu of flowers, memorial contributions may be made to the Blissfield First United Methodist Church or Hospice of Lenawee. Online condolences and memories may be shared at www.WagleyFuneralHomes.com. A celebration of Dwight’s life will also be held in California, with a future date and location to be determined.

Modesto, CA-It is with profound sadness that the family of Dwight Nelson Klump, D.D.S. announces his passing on July 21, 2019, at the age of 81. He will be immeasurably missed by his family. Dwight was born July 4, 1938 in Ogden Center, Michigan... View Obituary & Service Information

The family of Dwight Nelson Klump created this Life Tributes page to make it easy to share your memories.

Modesto, CA-It is with profound sadness that the family of Dwight...

Send flowers to the Klump family.