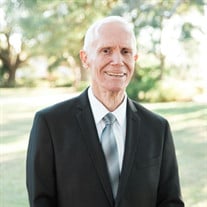 ADRIAN— Dr. Herbert N. Hood, Sr., DDS, MS age 87 of Adrian, passed away on Thursday, March 5, 2020, at Brookdale Assisted Living. Herbert was born on August 1, 1932, to Dr. Clifford and Clara (Mitchell) Hood. Upon graduating from Adrian High School, Herbert went on to the University of Michigan where he obtained his Doctor of Dental Surgery (DDS, MS) specializing in Orthodontics. He had a dental practice in Adrian for many years and was also an instructor of Orthodontics at the University of Michigan. On May 26, 1956, Herbert married the love of his life, Barbara A. Atkinson and they shared 60 wonderful years together before her passing in 2016. Herbert was a loving father to his children and treasured the time he spent with his family. His gentle and nurturing personality was reflected in the care he gave his young patients and the beautiful smiles he helped create. He loved being out on the water and found time to go sailing if the weather was good; he was also a member of the Devils Lake Yacht Club. In the summertime, Herbert traveled to the different county fairs in Michigan and judged horses in harness racing. Herbert is survived by his children, William A. Hood of Manitou Beach, Kimberly A. (Steve) Williams of Sand Creek, James M. (Karen W.) Hood of Littleton, NH, Dr Richard K. (Hayley) Hood of Naples, FL, Dr. Scott C. (Raelynn) Hood of Saline; grandchildren, Marissa, Harper, Nicole, Rachelle, James, Daniel, Michael, Sue, Matthew, Steven and Oliver; great grandchildren, Angela, Colin and Natalie; and his brothers, John Hood of California and Tom Hood of Adrian He was preceded in death by his parents, wife, Barbara and a son, Herbert Hood, Jr. Public visitation will be on Thursday, March 12, 2020, from 4 to 8 p.m. at the funeral home. Due to TRAVEL RESTRICTIONS and several family members being unable to attend, the funeral service and burial will now be private. Memorial contributions may be made to Civitan of Lenawee. Online memories and condolences are welcomed at www.WagleyFuneralHome.com

The family of Dr. Herbert N. Hood Sr. created this Life Tributes page to make it easy to share your memories.

Send flowers to the Hood family.