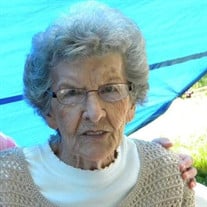 BLISSFIELD – Dot L. Cory, age 96 of Blissfield, passed away unexpectedly Saturday, March 17, 2018 at her home. She was born October 17, 1921, in Blissfield, Michigan, to George and Stella (Wilson) Doyle, and graduated from Blissfield High School where she was a member of the tennis team. In 1941, Dot married Charles Cory in Angola, Indiana, and they celebrated 50 years of marriage before his in death in 1991. Dot was a member of the Blissfield Presbyterian Church. She was known for her extensive vegetable gardens. Dot and her family enjoyed many wonderful summers at Sand Point, on Saginaw Bay, Lake Huron. She is survived by her children: Sherrie Cory of Centerville, OH; Jack Cory of Toledo, OH, Victoria (Brian) Papenhagen of Sand Point, MI; and Charles (Regina) Cory of Blissfield, MI; and many grandchildren, great grandchildren and great great grandchildren. In addition to her parents and husband, she was preceded in death by her brother, Jack, and her sister, Betty. The family would like to extend a heartfelt thank-you to Betty Gehring for her time shared with Mom. Funeral services will take place at 11 a.m., Friday, March 23, 2018, at Wagley Funeral Home, Tagsold Chapel in Blissfield, with Rev. Douglas E. Holmes officiating. Burial will be private. Visitation will be held at the funeral home Thursday, from 4 to 7 p.m. Contributions in memory of Dot are suggested to Blissfield Presbyterian Church. Online condolences and memories may be shared at www.WagleyFuneralHomes.com.

BLISSFIELD &#8211; Dot L. Cory, age 96 of Blissfield, passed away unexpectedly Saturday, March 17, 2018 at her home. She was born October 17, 1921, in Blissfield, Michigan, to George and Stella (Wilson) Doyle, and graduated from Blissfield... View Obituary & Service Information

The family of Dot L. Cory created this Life Tributes page to make it easy to share your memories.

Send flowers to the Cory family.