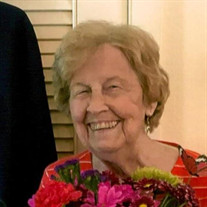 Dorothy Elizabeth Wakefield passed away at the age of 92, on March 7, 2020, spending more than sixty of those years living an active life in Adrian, MI. As a young girl she enjoyed farm life in Elkton Michigan, unaware of the depression going on around her, yet recalling the numerous “farm hands” who came and went to help her father with chores, joining the family for meals. She continued this generosity throughout her life. After World War II, when Ray returned from the Navy, they married and began their incredible adventure together, moving to Ann Arbor, Michigan. She attended nursing school at University of Michigan and he, engineering classes. Career opportunities for Ray brought them to Adrian, MI, where Dorothy became Adrian’s “Welcome Wagon” hostess, as well as “Newcomer’s” member while raising five rambunctious kids. As each child moved into adulthood, she found more time to devote to her community, including the Croswell Opera House, Tau Delta Sorority, where she served as president and earned the Alley Cat Award for outstanding service, Alpha Omega, and P.E.O. She enjoyed a monthly game of Bridge with the same ongoing group for 50 years. Her volunteer work at Bixby Hospital was a true passion. For 57 years she served in a variety of positions and on the Auxiliary Board as president. At 87-years-old she could still be seen in the hospital corridors, transporting patients in wheelchairs to be discharged. Dorothy believed that every child is important and valued. One unique way she demonstrated this was by baking a special birthday cake for each child who lived on Maurice Spear Campus. She also volunteered for the “Healthy Moms, Happy Babies” program, Adrian Community Nursery, and supported the Adrian Library. During their years together, Dorothy and Ray visited every state in the United States and enjoyed multiple cruises, including an extended trip around the world. They were members of Devil’s Lake Yacht Club and the First Presbyterian Church, where Dorothy played in the Hand Bell Choir. Dorothy is survived by her children, Gary (Lauri) of Clarkston, Mich, Laurie Reed of Eugene, Oregon, and daughter-in-law Joan Wakefield of Adrian, Mich. Grandchildren: Bryan (Brittany) Vogel, Eric (Kirsten) Vogel, Nathan Wakefield, Drew (Patrick) Soderborg, Jennifer (Brian) Payne, Ross (Lindsay) Wakefield, John Wakefield and Grant Wakefield. Great grandchildren: Jake, Vaughn, Eric, Daniel, Liam, Elliot, Oliver, Addison, Charlotte, Camdyn and Henrik. She was preceded in death by her husband, Ray, daughter Vicki Vogel, son Ron Wakefield, brother Don Southworth, and sister Doris Leipprandt. A memorial service for Dorothy will be held on Monday, August 3, 2020, at 11:00 a.m. at the Wagley Funeral Home in Adrian. A reception will immediately follow in the funeral home’s Heritage Room. Following the Governor’s executive order, all attendees are required to wear a proper face covering, with the exception of those under the age of five years old or those who cannot medically tolerate. For those unable be present, a live streaming of the service will be accessible from Dorothy’s tribute wall on www.WagleyFuneralHome.com, where a link to view the recording will be available for 90 days. Online condolences and memories may be shared at WagleyFuneralHomes.com. Those wishing to make a contribution in her memory should consider the Salvation Army, First Presbyterian Church, and Hospice of Lenawee.

Dorothy Elizabeth Wakefield passed away at the age of 92, on March 7, 2020, spending more than sixty of those years living an active life in Adrian, MI. As a young girl she enjoyed farm life in Elkton Michigan, unaware of the depression going... View Obituary & Service Information

The family of Dorothy E. Wakefield created this Life Tributes page to make it easy to share your memories.

Dorothy Elizabeth Wakefield passed away at the age of 92, on...

Send flowers to the Wakefield family.