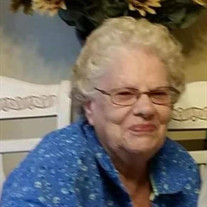 ADRIAN – Dorothy Mae Parker, 95, of Adrian died early Monday morning August 9, 2021 at her home while under the loving care of Hospice of Lenawee. Born June 5, 1926 in Adrian, Dorothy was the daughter of Ivan Theodore and Emma Elizabeth (Cope) Etter. She proudly graduated from Adrian High School in 1945. On August 8, 1947 Dorothy married the love of her life, Maurice (“Morey”) Parker in Angola, Indiana. They were blessed with over 68 years of marriage until Morey preceded her in death in May 2016. In her younger years, Dorothy helped Morey on the family farm where they raised crops and livestock. She helped to pay for the farm by raising chickens, selling eggs and raising pigs. Dorothy’s greatest love in life was her family. She was a proud homemaker, lovingly raising her children and caring for her home. Dorothy was an active member of Hope Lutheran Church in Adrian. In her spare time, Dorothy enjoyed playing bingo and cards. Dorothy is survived by her children, Gary Parker (Kathy Migliore) of Adrian and Linda Kindinger of Cape Coral, Florida; five grandchildren, Shad Parker of Toledo, Jason (Michelle) Counts of Adrian, Tawnya (Paul) Gregoire of Henderson, NV; Corey Kindinger of Fort Lauderdale, FL, and Adam (Rebecca) Parker of Palm Springs, CA; 9 great-grandchildren, and 6 great-great-grandchildren. She was preceded in death by her parents; beloved husband, Maurice; and three brothers, Harvey, Charles, and Dale Etter. A funeral service for Dorothy will take place on Friday, August 20, 2021 at 1:00 p.m. at Wagley Funeral Home, Adrian with Pastor Paul Herter officiating. Burial will follow at Palmyra Cemetery. Visitation will be held on Thursday from 4:00 to 8:00 p.m. at the funeral home and again on Friday from 12:00 p.m. until the time of the service. The family would like to thank Dorothy’s caregivers, Annie Fadlallah and Marge Snyder for their constant love and compassion; as well as her Hospice Nurse, Kathleen and Hospice Aide, Kimmie for their excellent care. The family suggests that memorial contributions to honor Dorothy’s memory be made to Hope Lutheran Church or Hospice of Lenawee. Online condolences and memories may be shared at www.WagleyFuneralHomes.com.

ADRIAN &#8211; Dorothy Mae Parker, 95, of Adrian died early Monday morning August 9, 2021 at her home while under the loving care of Hospice of Lenawee. Born June 5, 1926 in Adrian, Dorothy was the daughter of Ivan Theodore and Emma Elizabeth... View Obituary & Service Information

The family of Dorothy Mae Parker created this Life Tributes page to make it easy to share your memories.

Send flowers to the Parker family.