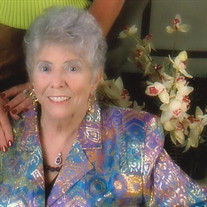 BLISSFIELD — Dorothy Lou (“Dottie”) Mitchell-Brown, 85, of Blissfield was called to our Father’s celestial home early Friday morning, June 12, 2020 to nurture, sow, and lovingly tend to The Master’s Garden. Born February 17, 1935, in Blissfield, she was the daughter of Millard and May Jewel (Faulk) Saxton. Dottie was a member of the Daughters of the American Revolution. She was a graduate of Blissfield High School. Dottie was proudly employed at the GM plant in Adrian. Dottie was an active member of the Wellsville Methodist Church. She was also a former member of the Blissfield Presbyterian Church. On January 16, 1954, Dottie married Charles Mitchell. They shared over 34 years together, until he preceded her in death in 1988. She later married William Brown on August 7, 1993. He preceded her in death in February 2007. Dottie was kind and nurturing and left a lasting impression on every life that she touched. She was a former 4-H leader for many years, a member of Civitan, and a Campfire Leader. Dottie was known for her artistic ability. In her spare time, she loved gardening, tending to both flowers and vegetables. Dottie is survived by her five children, Dawn (Robb) Harmon of Sarasota, FL, Robert O. Mitchell, II of Hillsdale, Dennis D. (Barbara) Mitchell of Blissfield, Joy (Rodney) Wonderly, and Penny Mitchell of Sarasota, Florida; six grandchildren, seven great-grandchildren; sister, Andrea (Roger) Sunday; four step-daughters, Debbie (Jim) Babiaz, Linda Bailey, Cindy (Gary) Dempsey, and Dianna Brown; eight step-grandchildren; and two step-great-grandchildren. She was preceded in death by her parents; her first husband, Charles; her second husband, William; and her sister, Virginia Jean Bacus. Per Dottie’s request, cremation will take place. A memorial service will be held for Dottie on Sunday, July 12, 2020 at 2:00 p.m. at the Wellsville United Methodist Church with a celebration of life following in her garden at the family home. The family suggests contributions to honor Dottie be made to Lenawee Therapeutic Riding and Civitan of Lenawee. Arrangements have been entrusted to Wagley Funeral Home, Tagsold Chapel, Blissfield, where online memories and condolences may be shared at www.WagleyFuneralHomes.com.

The family of Dorothy ("Dottie") Mitchell-Brown created this Life Tributes page to make it easy to share your memories.

Send flowers to the Mitchell-Brown family.