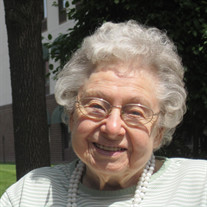 GOLDEN VALLEY, MN -- Dorothy Olive Cary passed away peacefully on May 26th, 2019 in Golden Valley, MN, just one week shy of her 100th birthday. Her kind heart, genuine smile, loving manner, and unending devotion to sweets will be missed by many. Dorothy was born June 2, 1919 in South Lyon, Michigan to Floyd and Matilda (Toelle) Bradley. She graduated from South Lyon High School in 1938, after which she found employment at the local bank. On January 16, 1943 she married Harrison G. Cary at South Lyon. At this time, they moved to Adrian, Michigan and settled down. Her husband preceded her in death on December 28, 1997. Dorothy is survived by two daughters, Linda Berry (Jeff Elliott) of Adrian and Diane (Shawn) Curley of Golden Valley, MN. Also surviving are her six grandchildren: Eric (Julie) Norden, Tate (Necia) Norden, Heather (Lupe) Duarte, Brenna Curley, Kate Curley, and Nick Curley. She is also survived by 9 great grandchildren, 4 great, great grandchildren and many nieces and nephews. Dorothy was preceded in death by her parents, husband Harrison, brother Merle Bradley, sister May Griswold, and many lifelong friends. Dorothy was an active member of the first United Methodist Church of Adrian and also the United Methodist Women’s group. She was a life member of Fairfield Chapter #224 O.E.S. and was also involved in Lenawee County Church Women United. She belonged to the Bixby Hospital Auxiliary and enjoyed volunteering for the Salvation Army. Most of her employment through the years was associated with office work, primarily bookkeeping and accounting. Dorothy retired from Gross and Ludwig, P.C. in December 1980. A Memorial Service for Dorothy will be held at 11 am, Saturday, August 10, 2019, with the Reverend Drew Hart officiating. A visitation will take place one hour prior, at 10 am. The family welcomes all to a luncheon immediately following the service. All will be held at Wagley Funeral Home, 1501 W Maumee Street, Adrian, MI 49221. Private internment of ashes to follow later that day at Lenawee Hills Memorial Park. A word of thanks goes out to the faithful caregivers over the past few years at North Ridge Assisted Living and to the North Memorial Health Hospice care team who aided in Dorothy’s final days. Memorials in Dorothy’s honor may be directed to the Adrian First United Methodist Church or the Salvation Army. Online condolences and memories may be shared at www.WagleyFuneralHomes.com

The family of Dorothy Olive Cary created this Life Tributes page to make it easy to share your memories.

Send flowers to the Cary family.