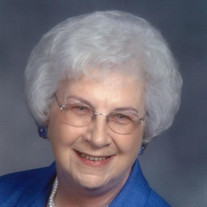 ADRIAN – Donna Jean (Bennett) Pearson “Who can find a virtuous woman? For her price is far above rubies. Strength and honour are her clothing; and she shall rejoice in time to come. She openeth her mouth with wisdom; and in her tongue is the law of kindness. Her children arise up, and call her blessed; her husband also, and he praiseth her.” Proverbs 31:10, 25-26, 28 Donna Jean (Bennett) Pearson, 90, passed away Saturday morning, January 22, 2022 at Gaslight Village Assisted Living, while under the exceptional care of Hospice of Lenawee, as well as the loving and watchful care of the staff of Gaslight Village. Born October 26, 1931 in Adrian, she was the daughter of Harold and Bessie (Clark) Bennett. A lifelong resident of Adrian, she was a proud Maple, graduating with the class of 1949. Following her graduation, Donna continued to stay connected to her classmates by organizing her class luncheons. On April 8, 1950, Donna married the love of her life, Charles C. Pearson, Jr. at Berean Baptist Church in Adrian. They celebrated over 65 years of love and memories until he preceded her in death on September 17, 2015. Family and faith were two of the most important things in Donna’s life. She was an active member of Berean Baptist Church, where she raised her five children. As a young woman, Donna worked at Bank of Lenawee in Adrian. In 1964, she began working for Adrian State Bank, where she was employed until 1984. She began as a teller, then served as a branch manager for many years before becoming an officer of the bank at the main office. Late in 1984, Donna and Chuck moved to Statesville, NC where they lived for over 11 years. While living in Statesville, Donna made many new friends, serving in their church, as well as in the Christian Women’s Club of Statesville. The couple moved back to Adrian in 1994, after Chuck’s retirement from Kewaunee Scientific Corp. Donna is survived by her five children, Deborah (Allen) Hatt, Craig (Patty) Pearson, Stephen (Jan) Pearson, Jamie (Dawn) Pearson, and Joy (Bob) Scott; 16 grandchildren; and 24 great-grandchildren, with three more arriving in 2022. In addition to her parents and her husband, Chuck, Donna was preceded in death by her brother, Clark Bennett; and her sisters, Jenny (Bennett) Wright and Bonnie (Bennett) Hunt. Funeral Services for Donna will take place on Wednesday, January 26, 2022 at 11:00 a.m. at Berean Baptist Church, 751 W. Maumee Street, Adrian, with Rev. Doug Rogers officiating. Burial will follow at Oakwood Cemetery. Visitation for Donna will be held on Tuesday from 5:00 to 8:00 p.m. at Wagley Funeral Home, Adrian, and again on Wednesday at the church beginning at 10:00 a.m. and continuing until the time of the service. The family suggests that memorial contributions to honor Donna’s memory be made to Berean Baptist Church or Hospice of Lenawee. Online condolences and memories may be shared at www.WagleyFuneralHomes.com.

ADRIAN &#8211; Donna Jean (Bennett) Pearson &#8220;Who can find a virtuous woman? For her price is far above rubies. Strength and honour are her clothing; and she shall rejoice in time to come. She openeth her mouth with wisdom; and in her... View Obituary & Service Information

The family of Donna Jean Pearson created this Life Tributes page to make it easy to share your memories.

“Who can find a virtuous...

Send flowers to the Pearson family.