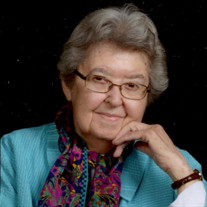 ADRIAN- Beloved mother and grandmother, Donna B. Dahringer, died peacefully on December 2, 2019, at Hospice of Lenawee. Donna was born May 13, 1933, in Sharon, Pennsylvania, to Frederick and Helen McCullough. She grew up in Masury, Ohio, graduating from Brookfield High School. She married Walter E. Dahringer, Jr, on May 28, 1954. They later divorced. In addition to her parents, Donna was preceded in death by her younger brother, Robert McCullough. She is survived by her three children, Nan Dahringer, Barbara (Jeffrey) McNally, and James Dahringer; two grandchildren, Ian McNally and Zoey Dahringer; two sisters, Sally Reigelman and Jeanne Hauck; several nieces and nephews, and great-nieces/nephews. As her mother before her, Donna was a public school teacher, and she retired after 35 years in the classroom. She received her bachelor’s degree from Youngstown State University and a master’s degree from Michigan State University. After her retirement from teaching at Parma Elementary, Parma, Michigan, she wrote curriculum for charter schools and continued her involvement within the classroom as a volunteer. Donna later moved to Adrian to be closer to family. She worked as the membership secretary for First United Methodist Church of Adrian for 20 years. Donna was an avid knitter, a keen Scrabble player, and enjoyed her membership in multiple small groups within her church community. As an animal lover, Donna and her daughter Nan shared their home with several rescue pets over the years. She vicariously enjoyed the worldwide travels of her son, James, and granddaughter Zoey, visiting them in Denmark. She was not surprised when grandson Ian pursued a career in politics, and she participated in her first protest march at the age of 85. She was a lifelong reader and fostered a love of children’s literature in her daughter Barbara. She greatly loved and admired her son-in-law, Jeffrey, and often referred to him as “the sane member of the family.” Donna enjoyed sports (especially Michigan State activities) and traveled with Nan to the Baseball Hall of Fame in Cooperstown as part of a baseball park pilgrimage. The family wishes to thank the staff of the critical care unit at Bixby Hospital and the staff at Hospice of Lenawee for their kind and considerate care during Donna’s time there. In lieu of flowers, the family suggests anyone wishing to make a memorial gift in her name to do so to the following organizations: Hospice of Lenawee, Habitat for Humanity (Adrian branch), Humane Society of the United States, and Adrian Community Preschool. Under arrangements with Wagley Funeral Home, cremation has taken place. A memorial service will be scheduled for a later date.

ADRIAN- Beloved mother and grandmother, Donna B. Dahringer, died peacefully on December 2, 2019, at Hospice of Lenawee. Donna was born May 13, 1933, in Sharon, Pennsylvania, to Frederick and Helen McCullough. She grew up in Masury, Ohio,... View Obituary & Service Information

The family of Donna Belle Dahringer created this Life Tributes page to make it easy to share your memories.

Send flowers to the Dahringer family.