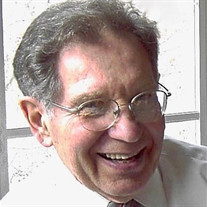 Riga- Wittbrodt, Donald Arthur April 3, 1926 to October, 2017 Rev. Donald Wittbrodt quietly passed away at his home this October at the age of 91. He was born in Auburn, Michigan, in 1926, the son of the late Bernard and Martha (Wazny) Wittbrodt. Preceding him also in death was his beloved wife, Mery Melba (Quiñones) Wittbrodt, this past December, 2016. Donald graduated from Bay City Central High School in 1944, and from Asbury College, Wilmore, KY in 1953. While in Kentucky, he met his future bride, Mery Quiñones, from Argentina, who was attending Asbury seminary. They were married in February of 1956 in Buenos Aires, Argentina and honeymooned in Bariloche. Back in the states, Donald completed his Masters of Divinity at Temple University School of Theology and served as Methodist pastor from 1959 to 1984, though he worked his entire life, as he wrote in his final papers, in the Methodist ministry. This includes summer ministry work he did starting churches. Donald’s wife Mery taught Chemistry in various schools in Michigan, as a complement to Donald’s ministry work at many different Methodist parishes, also doing Christian work focusing on international missions and helping Michigan migrant families. Donald is of German, Polish ancestry. His ancestors emigrated to America in the 1870s. He was always very industrious, from working the farm in Auburn, to working several jobs to pay for his college education, as well as taking a break from the ministry to work odd jobs in 1974 so that his children could finish high school in their home town of Blissfield, instead of taking another parish in upper Michigan. Donald wrote that he also took time off in 1979 to 1986 to “work the dock” in Toledo, Ohio. At Emmanuel Methodist, he was a Sunday School teacher. Preceding him in death were his brothers, Robert, James, Kenneth, and Bernard, and four in-laws, Ann Wittbrodt, Andrés Spies, Neil Periard, and Francis Sczepanski, and family friend Margaret Talicska. He is survived by two children, Deborah (Gary) Nystrom of Ann Arbor and Donald (Penny) Wittbrodt Jr. of Winchester, Ky.; three grandchildren, Janelle Nystrom, Ian (Bethany) Nystrom and Donald, a.k.a. Donnie (Jessica) Wittbrodt III, siblings; Mary Ann Periard, Bay City, William (Kathleen), Dorothy (James) Robbins all of Auburn, Carolyn (Gilbert) Igowski, New Berlin, WI., Thomas (Carole) Wittbrodt, Framingham, MA., Betty Sczepanski, Eureka, CA., Margaret (Jack) Woods of Midland, MI., and his sister-in-law, Vilma Spies in Morón, Buenos Aires, Argentina, as well as by over 150 nieces and nephews including his niece Lilian Spies. The memorial service is scheduled for Saturday, November 18, 2017, at 1:00 PM at Emmanuel United Methodist Church in Blissfield, Michigan, with Pastor Devin Smith officiating. Family will receive friends from noon until the time of service at the church. Memorial contributions may be made to Emmanuel United Methodist Church; envelopes will be available at the church. Expressions of sympathy may be made at www.WagleyFuneralHome.com.

Riga- Wittbrodt, Donald Arthur April 3, 1926 to October, 2017 Rev. Donald Wittbrodt quietly passed away at his home this October at the age of 91. He was born in Auburn, Michigan, in 1926, the son of the late Bernard and Martha (Wazny) Wittbrodt.... View Obituary & Service Information

The family of Donald Arthur Wittbrodt created this Life Tributes page to make it easy to share your memories.

Send flowers to the Wittbrodt family.