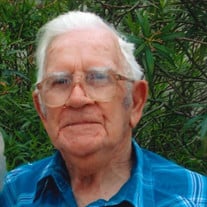 BLISSFIELD – Donald Dwight Powell, age 97 of Blissfield, passed away on Friday, December 24, 2021, peacefully at Lenawee Medical Care. Born on July29, 1924, in Jasper, Michigan to Samuel Dwight and Gertrude M. (Woodruff) Powell. Don graduated from Sand Creek High School with the Class of 1942. Don enlisted in the United States Navy in 1943 and served as a diesel mechanic during World War II, stationed in the Pacific until his discharge in 1946. During his time in the Navy, Don earned 5 Battle Stars. Upon returning home from service, Don married Helen A. Wilson on June 11, 1946, in Bowling Green, Ohio; and they were blessed with over 71 years together before her death on January 9, 2018. Don and Helen were charter members of the Ogden Community Bible Church. He worked for General Telephone of Adrian for several years before being transferred to Texas, where he retired from in 1981. While living in Texas, Don and Helen served with the Texas Baptist Builders, assisting in the construction of 19 churches. Due to health reasons, Don and Helen returned to Michigan to be closer to family. Don is survived by his son, Dennis (Gloria) Powell of Tecumseh, grandsons, Ryan (Linda) Powell and Eric Powell of Adrian; great-grandchildren, Anias, Myles, Harmony and Kayla; and several step great-grandchildren. In addition to his wife, Helen, he was preceded in death by his brother, Ralph and sister, Joyce. A Celebration of Life will take place on Wednesday, January 5, 2022, at 1:00 p.m. at Wagley Funeral Home, Tagsold Chapel, Blissfield with Pastor Gene Reitz officiating. Burial will follow at Pleasant View Cemetery, where military honors will be conducted by American Legion Post #325.Visitation will take place from 11:00 a.m. to 1:00 p.m., prior to the Celebration. The Powell family wishes to express their gratitude and appreciation to Lenawee Medical Care Facility and Hospice of Lenawee for their loving care and compassion shown to Don over the past few years. Memorial contributions may be made to Hospice of Lenawee. Online condolences and memories may be shared at www.WagleyFuneralHomes.com.

The family of Donald Dwight Powell created this Life Tributes page to make it easy to share your memories.

Send flowers to the Powell family.