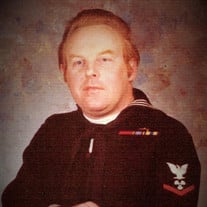 PALMYRA – Donald Richard Marcus, 82, of Palmyra, died at home Wednesday, July 14, 2021. Born in Detroit on January 17, 1939, to Edward and Laudina Esther (Hammermaster) Marcus, Don moved to the Palmyra area in 1956, graduating from Blissfield High School in 1960. On May 6, 1967, he married Judy Lou Coulson, who survives. Don worked at the Cherry Nook during his high school years, and joined the United States Navy, serving aboard the USS Bristol DD857 from 1961 to 1966. He was employed by General Motors starting in 1966, first at the Tecumseh Fisher Body Plant until it closed in 1987 and retiring from the Powertrain Hydramatic plant in 2010. Since his retirement he enjoyed attending Navy reunions, and spending time with his grandchildren. Don loved his family and his country. He was a member of the Veterans of Foreign Wars, and for many years could be found selling poppies, attending Veterans’ funerals, and talking with others (often over a donut) about his experience. Every year since the late 1960’s, Don drove a flag float in the Palmyra and Blissfield Memorial Day parades. In addition to his wife, Judy, Don is survived by his children, daughter Judy (David) Opalek of Hilliard, Ohio, and son Don (Dawn) Marcus of Palmyra; 6 grandchildren, Elizabeth, Alexander, and Isaac Opalek and Aaron, Zachary, and Kenzie Marcus; his sister, Diana Johnson of Phoenix, AZ; and special cousin, Leonard (Sonny) Hammermaster. He was preceded in death by his parents and lifelong best friend, Jim Coudron. A memorial service for Don will be held on Wednesday, July 21, 2021 at 2:00 p.m. at Wagley Funeral Home Tagsold Chapel, Blissfield with Envoys Terry and Margaret Gaster of the Salvation Army officiating. Military honors will be provided by Blissfield American Legion Post #325 and VFW Post #1584. Visitation will take place beginning at 1:00 p.m. and continuing until the time of the service. Don will be laid to rest at Palmyra Cemetery. In lieu of flowers, the family suggests that memorial contributions be made to the Palmyra Fire Department. Online condolences and memories may be shared at www.WagleyFuneralHomes.com.

The family of Donald Richard Marcus created this Life Tributes page to make it easy to share your memories.

Send flowers to the Marcus family.