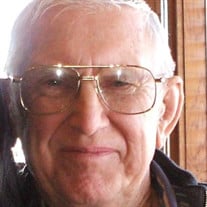 ADRIAN – Donald E. Jenkins Sr. of Adrian, Michigan passed away peacefully in his home on February 19th, 2021 at the age of 94. Don married Donna in the 1940’s, they had two children, and although they divorced in the late 60’s they remained lifelong best friends and neither remarried. Don proudly served in the United States Navy from 1944 to 1946. After serving his country, he worked for his father’s business - Jenkins Station. Don had a knack for fixing things, especially cars; it explains why he enjoyed his many years working for Napa Auto & Paint Supply where he later retired. Throughout his life he was a loyal and hard worker who provided endless love and support for his family. He enjoyed motorcycle rides, early morning breakfasts with others, watching old westerns and a variety of music. Most days you would find him helping others; family, friends, neighbors and strangers. Over the years, his only indulgence has been early morning breakfasts or multiple cups of coffee & friendly chats to customers at his local favorites which included Tip Top, Main Stop, and Alpha’s Koney Island. Don is preceded in death by his mother - Dorothy & father - William Jenkins, two brothers - Pinkie (Robert) and Bill Jr., his late wife Donna Jenkins, a daughter - Penny Jenkins and a great grandson - Zachary. He is survived by a son, Donald Jenkins Jr., 4 granddaughters, Shayna Smith (Phil Smith) in Great Britain, Erica Gordon of Adrian, Amber Lam (Mike Lam) of Boston, MA and Carrie Powell of Jackson, MI, 6 great grandkids Chassie Tibai, Kayla Tiede, Andrew, Jeffrey, Cassie and Katie and 12 great-great grandchildren. He lived a long life of selfless devotion to family and being kind to others. He is admired, forever loved and a hero to his grandchildren. He will be deeply missed by all who knew him. The family would like to say a special & heartfelt thank you to Alpha Koney Island for their above and beyond service, friendship and time that they extended to our grandpa over the years. The family would also like to express their sincere appreciation and gratitude to Hospice of Lenawee and Visiting Angels! With your help our family was able to give our grandpa his final wish, to be at home. A graveside interment service will be held for family & friends on Wednesday, May 5, 2021, at 11:30 a.m. at Hunt Cemetery with Pastor Larry Betz officiating. Wagley Funeral Home, Adrian has been entrusted with arrangements. In lieu of flowers, memorial contributions are suggested to Hospice of Lenawee or the Visiting Angels Foundation. Online condolences and memories may be shared at www.WagleyFuneralHome.com.

The family of Donald Eugene Jenkins Sr. created this Life Tributes page to make it easy to share your memories.

Send flowers to the Jenkins family.