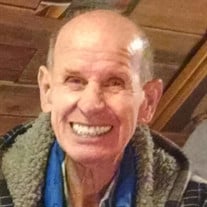 BLISSFIELD - Donald "Don" G. Hollingshead, 75 of Blissfield, passed away Friday, August 18, 2017 at his home under the loving care of his family and Hospice of Lenawee. Don was originally from Manhattan, Kansas, born on January 8, 1942. He was one of ten children born to Kenneth Hollingshead and Elizabeth Naomi (Eaton) Hollingshead-Remmert. He proudly served his country in the United States Navy from 1960-1964, where he started his career as a machinist mate and was stationed in San Diego, California. He became a lifetime resident in San Diego, CA where he worked as an auto mechanic for John Hine Pontiac for many years. His love of boating eventually led him to become one of the most reputable marine mechanics in San Diego. He loved building hot rods and dune buggies and enjoyed camping with his family and friends. He enjoyed scuba diving, country western movies and country western dancing. He had a special interest in collecting coins and paper money. He cherished spending time with his family and friends and enjoyed having BBQ's and good old fashion conversations. His last eight years were spent in Blissfield, Michigan near his daughter, Shera Ainsley, son-in-law, John Ainsley and three of his grandchildren; and where he met many new friends and neighbors. Don is survived by his children, Lynna Ricotta, Shera (John) Ainsley, Iven Hollingshead, and Deena Hollingshead. He had seven grandchildren, Russell Ricotta, Adam Ainsley, Kristie Ricotta, Jessica Duff-Ainsley, Sean Ainsley, David Frank and Gage Brown, and 5 great- grandchildren. He is also survived by six siblings, Ann Ostrander, Pam Olsen, Ivan Hollingshead, Joseph Hollingshead, Ayrus Reynolds and Sharon Remmert-Butler. In addition to his parents, Don was preceded in death by his siblings, Margaret Hemmerson, Pete Hollingshead and Kenneth Hollingshead. He will always be remembered for his witty sense of humor and loving nature. Memorial services will take place in Kansas. Services were entrusted to Wagley Funeral Home, Tagsold Chapel, Blissfield where online condolences and memories may be shared at www.WagleyFuneralHome.com.

BLISSFIELD - Donald "Don" G. Hollingshead, 75 of Blissfield, passed away Friday, August 18, 2017 at his home under the loving care of his family and Hospice of Lenawee. Don was originally from Manhattan, Kansas, born on January 8, 1942. He... View Obituary & Service Information

The family of Donald G. Hollingshead created this Life Tributes page to make it easy to share your memories.

Send flowers to the Hollingshead family.