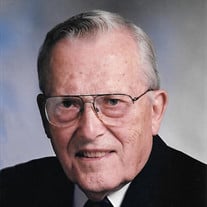 Donald Edgar Granzow, of Hastings, MI, age 96, went to be with the Lord on November 5th, 2021. He was born on February 15, 1925 to Clyde and Marie Granzow, and was raised on the family’s centennial farm in New Haven, MI. In 1953 he graduated with a Doctor of Dental Surgery degree from the University of Michigan. Following graduation, he served two years as a Lieutenant in the Coast Guard, traveling around the Great Lakes area in a dental truck to provide services to soldiers at coast guard stations. Donald married Evelyn Duerk on August 25, 1955 in Detroit, MI. They moved to Blissfield, MI in 1956, where he opened his own dental practice above what was then the Blissfield State Bank on the corner of 223 and Lane St. In 1971 he built his dental office on Giles St. He walked to work every day and enjoyed lunching with locals at the Towne Pump. He was well known in the community, and often referred to as “Doc” by many of his patients and friends. Donald retired from his dental practice in 1989. Donald was a man of deep faith and lived a life of service to both the Lord and the community. He was an active member of St. Paul’s Lutheran Church in Blissfield for over 50 years. He served on the church board, taught both youth and adult Sunday school, was a member of the church choir, and bowled on the church bowling team. Donald served on the board for the Lenawee Department on Aging and delivered Meals on Wheels in the area. He was a member of the Blissfield Kiwanis and a supporter of many high school and community events. He also served as an assistant Scout Master. After he retired from his dental practice he volunteered as a helper at Flower Hospital for 20 years. He said he often got strange looks from patients in the hospital when he was delivering a meal or pushing a patient down the hall, and someone from Blissfield would recognize him and call him Doc. Donald had a passion for genealogy and spent many hours searching both his own and Evelyn’s family trees. At one point they traveled to Germany to visit some of the towns of their ancestors. They both enjoyed traveling and took trips to Hawaii, Alaska, and multiple countries across Europe. One of their favorite trips was to the Holy Lands in Israel. Family was extremely important to Donald. He was thrilled to meet his first great grandson, Oliver, in the summer of 2021. He often referred to that as a “great day”. Surviving Donald are his brother Lyle (Kay) Granzow, his children John (Gwen) Granzow, Steve (Linda) Granzow, Kathy (William) Krueger, and Tom (Jennifer) Granzow, grandchildren Chase Granzow, Gage (Kali) Granzow, Zlatko Granzow, Emma Granzow, and Ian Granzow, and great-grandchild Oliver. Donald was preceded in death by his beloved wife Evelyn and his sister Lorraine Walainis-Strutz. Funeral service for Donald will be held on Thursday, November 11, at St. Paul Lutheran Church in Blissfield beginning at 11:00 A.M. Visitation will be held on Wednesday, November 10, at Wagley Funeral Home Tagsold Chapel in Blissfield, from 4:00 – 7:00 P.M. Memorial contributions can be made to either St. Paul’s Lutheran Church in Blissfield or Grace Lutheran Church in Hastings.

The family of Donald Edgar Granzow created this Life Tributes page to make it easy to share your memories.

Send flowers to the Granzow family.