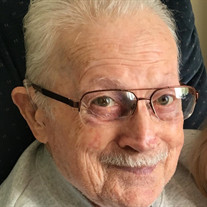 TECUMSEH - Donald Noah Good, 90, of Tecumseh, passed away Friday, September 29, 2017, at Tecumseh Place II surrounded by his family. Don was born December 29, 1926, in Toledo, Ohio, to Bernard and Mildred (Grimes) Good, Sr. He served his country during World War II in the United States Army. He married Emeline “Em” A. Dvorsky on June 25, 1949, at St. Peter the Apostle Catholic Church in Blissfield, and they had 63 wonderful years together before her passing in 2013. Donald was a member of St. Elizabeth’s Catholic Church in Tecumseh and also belonged to the American Legion. He worked for 40 years at Tecumseh Products. Don was a skilled carpenter and was always involved on a woodworking project. He also enjoyed gardening and hunting in his younger years. Donald took great pride in his family and showed this in many ways such as being a devoted husband to Em and sharing his love and time with his children, grandchildren and great-grandchildren. Donald is survived by his daughters, Arlene Hambrook of Tecumseh, Karen (Rick) Diesing of Blissfield and Brenda (William) Sisty of Petersburg; grandchildren, Angela (Tom) Johnson, Eric Diesing, Ann (Josh) Sisty-Reynolds, William (Kristiann) Sisty, Jr., Kristina Granger; and great grandchildren, Clayton, Jackson, Sawyer, Kayden, Sage, Lily, Karleah and Katherine. In addition to his parents, he was preceded in death by his wife Emeline, siblings Bernard, Oleta and Sylvan, and grandson Joshua Hambrook. Visitation for Donald will be on Wednesday, October 4, 2017 from 2 to 8 p.m. at Wagley Funeral Home Tagsold Chapel in Blissfield, with a prayer service at 7 p.m. Visitation will also take place on Thursday, October 5, 2017 at Light of Christ Parish in Blissfield from 10 a.m. until the time of service. Mass of the Christian Burial will take place at 11 a.m. on Thursday, October 5, 2017, at Light of Christ Parish, St. Peter’s Church, Blissfield with Fr. Dan Wheeler as Celebrant. Entombment will follow at Toledo Memorial Park. Military rites will be conducted by the Blissfield VFW Post 10912 and Blissfield Legion Robert Meachen Legion 325. Contributions in memory of Donald may be made to the donor’s charity of choice. Online condolences and memories may be shared at www.WagleyFuneralHome.com.

The family of Donald N Good created this Life Tributes page to make it easy to share your memories.

Send flowers to the Good family.