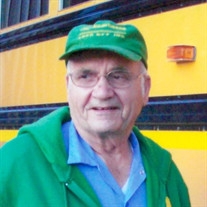 SAND CREEK – Donald C. Emmons, age 86 of Sand Creek passed away Friday, April 16, 2021, at Swanton Valley Rehabilitation Center. He was born January 21, 1935, in Jasper, Michigan, the oldest of the six children of the late Carl and Pearl (Smith) Emmons and graduated from Sand Creek High School in 1952. On March 12, 1955, he married Anita “Joan” Roth at her parents’ home. Don and Joan celebrated over 57 years together before her death in 2012. Don worked on the family dairy farm, milking cows until 1996, and was a member of The Holstein-Friesian Association of America. After selling the cows, he continued crop farming until just a couple of years ago. Don retired in 2008 after 55 years of driving bus for Sand Creek Community Schools. He loved his work and watched generations of Sand Creek families grow up and graduate. While driving bus, he worked at both Sand Creek and Packard cemeteries. Don was a faithful member of Weston Baptist Church where he served on the board. He also served as trustee for Seneca Township. Additionally, Don served in the Army National Guard for eight years. Surviving are his three children, Janis Emmons of Sand Creek, Judy (Andrejs) Kalnmals of Chicago, and Curtis (Julie) Emmons of Midland, MI; grandchildren, Amanda (Paul) Young, Christopher Kalnmals, Michael Emmons and Liena Kalnmals; great grandchildren, Parker and Hudson Young; his siblings, Mary Helen (Hershel) Love, John (Cheri) Emmons, Janet (Douglas) Bennett, Norman (Gloria) Emmons; and his sister-in-law, Mary Emmons. He was preceded in death by his brother, Richard Emmons. Funeral services for Don will take place at 1 p.m., Monday, April 19, 2021, at Wagley Funeral Home, Adrian with Reverends Duane Cross and Robert Farison officiating. Burial will follow at Sand Creek Cemetery. Visitation will take place at the funeral home Monday from 11 a.m. until the service. Contributions in memory of Don may be made to Weston Baptist Church or Camp Selah. Following the Governor’s executive order, all attendees are required to wear a proper face covering, with the exception of those under the age of five years old or those who cannot medically tolerate. For those unable to be present, a live streaming of the service will be accessible from Don’s tribute wall on www.WagleyFuneralHome.com, where a link to view the recording will be available for 90 days. Online memories and condolences may be shared at www.WagleyFuneralHomes.com

The family of Donald C. Emmons created this Life Tributes page to make it easy to share your memories.

Send flowers to the Emmons family.