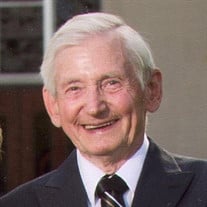 TOLEDO – (Donald) “Bruce” Emerson, 78, of Adrian, passed away Friday, January 19, 2018 at Toledo Hospital after fighting a courageous battle with heart disease. Bruce was born January 31, 1939 to Paul and Alice (Baushke) Emerson in Watervliet, MI. After graduating from Watervliet High School in 1957, he began schooling at Tri-State College. In 1960, he transferred to Adrian College. It was there that he “spotted” Linda Kapnick, while taking Polaroid pictures of the incoming freshmen for the college newspaper. Bruce asked around until he found someone to introduce them. Two years later, on July 11, 1964, they married in a beautiful ceremony at Herrick Chapel at Adrian College. They were the first couple to ever be married in Herrick Chapel. They shared 53 wonderful years together. He proudly served our country as a Pilot in the Navy. Ironically, his flight to Florida to begin his training was the first time he was on an airplane. Bruce flew P3 Orion Sub Chasers during the Cuban Missile Crisis in the 1960’s. His Commanding Officer described him as a “first-rate, natural pilot.” Bruce’s friends often described him as a gentle, quiet man. Following his service in the Navy, Bruce was an educator and worked in many of the public schools and sold insurance. He was an avid golfer and truly enjoyed the annual “Emerson Open.” He also enjoyed hockey and has had season tickets to Adrian College Hockey since the team begun. Bruce inspected boats as a boat safety volunteer. He was an active member of the Adrian First United Methodist Church and was a choir member for many years. One of his greatest passions in life was supporting the American Red Cross. He was dedicated to the organization for many years and was a proponent of donating blood. Bruce is survived by his wife, Linda Emerson of Adrian; two sons, Timothy Emerson (Rachel Capper-Chapman) of Adrian and Peter (Tisha L.) Emerson of McGregor, TX; granddaughter, Sarah Lin Emerson of McGregor, TX; two brothers, Dave Emerson of Sodus, MI and Dale Emerson of Cadillac, MI; and his faithful K-9 companion, Oliver Wendell. He was preceded in death by his parents. A Memorial Service for Bruce will take place at 1:00 pm on Friday, January 26, 2018 at Wagley Funeral Home, Adrian with Rev. Drew Hart officiating. Military honors will be conducted by the American Legion Post #97 and VFW Annis Fint Post #1584. Visitation will be held at the funeral home on Friday from 11:00 a.m. until the time of the service. The family suggests memorial contributions in Bruce’s name be made to the American Red Cross. Online condolences and memories may be shared with the family at www.WagleyFuneralHomes.com.

The family of (Donald) "Bruce" Emerson created this Life Tributes page to make it easy to share your memories.

Send flowers to the Emerson family.