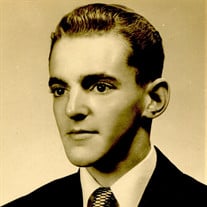 ADRIAN – Donald E. Broderick, age 85 of Adrian, passed away Thursday, September 13, 2018 at Lynwood Manor. He was born November 14, 1932, in Adrian, to Harold and Blanche (Fetzer) Broderick, Sr. After graduating from Adrian High School in 1951, he joined the Coast Guard and served on a buoy tender in Woods Hole, MA until 1954. Donald was married to Doris Whitaker who preceded him in death in 1998. Donald retired from Johnson Controls in 1990 with 36 years of service. He was a life member of American Legion Post #97 as well as a member of the Adrian Moose Lodge and Eagles Club. In his younger years he enjoyed hunting, and later in life traveling in his motor home. He is survived by his daughter, Julie (Jesse) Irish of Florida; a brother, Harold (Sally) Broderick, Jr. of Tecumseh; a sister, Shirley (Richard) Gobba of Deerfield; granddaughters, Jamie Hoffmeyer and Jennifer Irish; and seven nieces and nephews. In addition to his parents and wife, he was preceded in death by a daughter, Brenda in infancy and a son, Donald Broderick Jr. Funeral services will take place at 4 p.m., Sunday, September 16, 2018, at Wagley Funeral Home, Adrian with Rev. Gary Leking officiating and military honors conducted by VFW Annis Fint Post #1584 and American Legion Post #97. Burial will be private. Visitation will be Sunday from 1 to 4 p.m. Contributions in memory of Donald are suggested to Hospice of Lenawee or the Lenawee Humane Society. Online condolences and memories may be shared at www.WagleyFuneralHomes.com.

The family of Donald E. Broderick created this Life Tributes page to make it easy to share your memories.

Send flowers to the Broderick family.