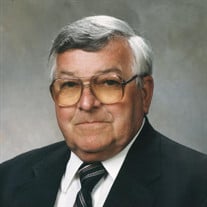 ADRIAN – Donald Robert Baughey, Jr., 90, of Adrian, Michigan died on Monday, February 14, 2022, at home under the care of Hospice of Lenawee with his family by his side. Don was born April 18, 1931 in Adrian, Michigan, to Donald Robert Baughey, Sr. and Ethel Belle (Divens) Baughey. Don attended school in Adrian and was a Maple his whole life. On April 2, 1950, Donald married Dorcas Mae Shepherd and they were blessed with 70 wonderful years together before her death on November 15, 2020. Don was a talented businessman and demonstrated anything was possible when you put your mind to it. Don worked at American Chain and Cable for over 30 years before retiring and working full time in his growing construction business. He was the owner of Don Baughey and Sons Construction, building over 400 homes in the Lenawee County area. For many years, Don and Dorcas were the owners and operators of Superior Dry Cleaners and co-owners of Super Laundry Mat in Adrian, which was located in the strip mall that Don also co-owned. Don was raised in the Pilgrim Evangelistic Church where his father, Rev. Donald R. Baughey, Sr. served. Don worked alongside his father in preparing many radio broadcasts over the years. He lived his faith every day in how he treated others and the example he set for his family. Don provided meticulous care to his lawn and enjoyed the time he spent outdoors. He is survived by his four children, Jack and Mary Baughey of Bradenton, Florida, Daniel and Brenda (Baughey) Wright of Hudson, Gary R. and Jane Baughey of Adrian, and Bud and Dawn (Baughey)Lowe of Hudson. Don is also survived by 17 grandchildren, 24 great grandchildren, 8 great-great-grandchildren; and sisters, Joann (James) Rupert of Phoenix, AZ and Mary Watters of Tecumseh. He was preceded in death by his wife, Dorcas; grandson, Chad Baughey, Sr., and great-grandson, Justin Robertson. Visitation will be held on Thursday, February 17, 2022, from 6 to 8 p.m. at Wagley Funeral Home in Adrian, and then again from 10 to 11 a.m. on Friday, February 18, 2022, at the funeral home. Funeral services will take place on Friday, February 18, 2022, at 11 a.m. at Wagley Funeral Home with Pastor James Eckart officiating. Burial will follow at Lenawee Hills Memorial Park. Online condolences and memories may be shared at www.WagleyFuneralHomes.com.

ADRIAN &#8211; Donald Robert Baughey, Jr., 90, of Adrian, Michigan died on Monday, February 14, 2022, at home under the care of Hospice of Lenawee with his family by his side. Don was born April 18, 1931 in Adrian, Michigan, to Donald Robert... View Obituary & Service Information

The family of Donald Robert Baughey, Jr. created this Life Tributes page to make it easy to share your memories.