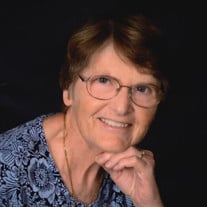 BLISSFIELD – Dianne Faye Gentz, 73, of rural Blissfield, died early Friday evening, August 28, 2020 at her home, in the presence of her loving family while under the compassionate care of Hospice of Lenawee. She was born August 6, 1947, in Saint John, New Brunswick, Canada, a daughter of the late John and Joan (Sida) Ellis. Her parents, who met during World War II, settled in Wyandotte, Michigan, where Dianne lived her formative years. She was a 1965 graduate of Roosevelt High School, and furthered her education at Michigan State University, where she earned a Bachelor’s Degree in Education. It was during her college years that she met the love of her life, Ronald Gentz of Blissfield. They married on September 7, 1968, and both began their careers as teachers. Dianne first taught at Leslie Elementary School, until her children were born. She spent the next several years raising her daughters, instilling in them a strong foundation of faith and core values. She later returned to the workforce as a secretary for Lutheran High School in Westland, followed by St. Paul Lutheran School in Farmington. Before her retirement, Dianne and Ron were blessed with the construction of a new home back near Ron’s roots on Beamer Road. Accompanied with a pond and serene private property, it was there that Dianne reaped the rewards of her hard work and kindness. Her and Ron became members of Hope Lutheran Church, who became their second family, with whom Dianne was happy to share her faith as a member of Bible Study. In spare time, she enjoyed puzzles, playing cards, reading, and was skilled at sewing and cross-stitch. Most importantly, she will be remembered for her humility and faithful devotion as a wife and mother. Surviving to cherish her memory are her husband, Ron; three daughters, Julie (Lloyd) Conway of Lansing, Lori (Daniel) Jones of Deltona, FL, and Amy (Patrick) Collins of Westland; three beloved grandchildren, Olivia and Abigail Conway and Connor Jones; two sisters, Janet (Jim) Elling of Bloomington, MN and Donna (Robert) Thornthwaite of Sugarland, TX; and numerous nieces and nephews. In addition to her parents, she was preceded in death by a sister, Jillian LaFray. A memorial service for Dianne will be held on Wednesday, September 9, 2020 at 1:00 p.m. at Hope Lutheran Church in Adrian with Rev. Paul Herter officiating. A reception will immediately follow. A memorial gathering will take place at Hope Lutheran Church on September 9 beginning at 12:00 p.m. and continue until the time of the service. Arrangements were entrusted to the Wagley Funeral Home, Tagsold Chapel in Blissfield. Following the Governor’s executive order, all attendees are required to wear a proper face covering, with the exception of those under the age of five years old or those who cannot medically tolerate. For those unable to be present, a live streaming of the service will be accessible from Dianne’s tribute wall on www.WagleyFuneralHome.com, where a link to view the recording will be available for 90 days. In lieu of flowers, the family suggests that donations to honor Dianne be made to Hope Lutheran Church, Hospice of Lenawee, or the Hickman Cancer Center. Online memories and condolences may be shared at www.WagleyFuneralHomes.com.

BLISSFIELD &#8211; Dianne Faye Gentz, 73, of rural Blissfield, died early Friday evening, August 28, 2020 at her home, in the presence of her loving family while under the compassionate care of Hospice of Lenawee. She was born August 6, 1947,... View Obituary & Service Information

The family of Dianne Faye Gentz created this Life Tributes page to make it easy to share your memories.

Send flowers to the Gentz family.