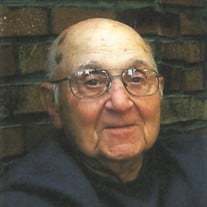 ADRIAN- Dennis L. Castle, age 97, passed away at his home on December 11, 2020 after a short illness. His wife of 72 years, Marjorie and daughter, Jane were with him. Jiggs was born January 4, 1923 in Addison, Michigan and graduated from Addison High School in 1941. He served 4 years in the U.S. Marine Corps and saw action in the Pacific Theater during WWII. Upon returning to the states he started his 39 year banking career at Addison State Savings Bank and continued with Commercial Savings Bank and Jipson Carter Bank. He served on the Addison Community Hospital Board, Addison School Board and Addison Kiwanis Club. After moving to Adrian in 1963, he became a member of the Adrian Area Chamber of Commerce, Lenawee Country Club, Adrian Kiwanis Club and the Michigan Bankers Association. He served as an officer in several of the organizations. An avid sportsman, he played baseball, softball and golf. As a golfer, he made several holes-in-one, and shot his age at 93. He continued to golf until he was 96. Jiggs also enjoyed bow hunting and fishing. In retirement, he pursued woodworking and “fixing things” for family and friends. He firmly believed the Marine Corps motto “Semper Fidelis” and was a true husband, father and friend. He enjoyed playing cards, helping his friends and visiting. Jiggs and Marjorie Ann Voorhees were married on May 19, 1948. They had two daughters, Sherry Ann Castle and Jane Denise Castle. He is proceeded in death by his parents, brothers – Harvey and Harold and daugher, Sherry Ann Castle Seager. He is survived by his wife, Marjorie, daughter Jane Castle and her husband, Thomas Boldt and son-in-law, Richard Seager, nieces Nancy Eggleston, her family and Carla Castle Mercicle. Cremation has taken place. A private burial will be held at a later date in Dibble Cemetary, Wheatland Township, Hillsdale County. Memorial contributions may be made to Hospice of Lenawee, Lenawee Historical Museum or a charity of your choice. Arrangements have been entrusted to Wagley Funeral Home, Adrian. Online memories and condolences may be shared at www.WagleyFuneralHomes.com

ADRIAN- Dennis L. Castle, age 97, passed away at his home on December 11, 2020 after a short illness. His wife of 72 years, Marjorie and daughter, Jane were with him. Jiggs was born January 4, 1923 in Addison, Michigan and graduated from Addison... View Obituary & Service Information

The family of Dennis "Jiggs" Castle created this Life Tributes page to make it easy to share your memories.

Send flowers to the Castle family.