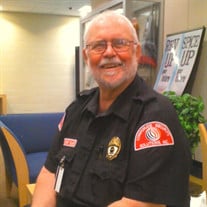 ADRIAN – Dennis Ray Bolton, 79, longtime resident of Adrian, MI, departed this life on February 6, 2021, in his home embraced by his loving wife, Karol “KZ”, family and friends through thoughts, prayers, and presence. Dennis was born on January 1, 1942 in Pontiac, MI, the eldest son of Lynn and Phyllis (Heimke) Bolton. He grew up in Napoleon, MI, and spent his childhood wandering the woods, riding his bike around the lakes, climbing high up into the forest trees, or playing “army” with his friends and little brother, Ken. After learning to read, he filled his head with stories of space exploration, frontier heroes, adventure on the high seas, and later spies and intrigue. Dennis went to Napoleon High School and participated in track, cross country, football, and basketball. Dennis embarked on his own high seas adventure following his graduation from Napoleon High School in 1961. While still in High School, he enlisted in the US Navy Reserve and began his decade-long service to our country. In 1961 Dennis began his Navy career, stationed in San Diego, and joined the fleet in 1962. Early in, he was married to his high school sweetheart, Joyce Murphy, and had a daughter, Michelle. He had three deployments to Westpac in Vietnam, steamed during the Cuban Missile Crisis as part of the amphibious group, and as a Craftmaster based in DaNang, made multiple landings up and down South Vietnam coast on a reefer (refrigeration boat) which kept the American presence in Southeast Asia well-fed. Other ports of call included Hong Kong, Subic Bay in the Philippines, Okinawa and Nagoya, Japan, Midway Island and Wake Island. During his tenure in the Navy, Dennis enrolled in Electrician School and became an Electricians Mate 1st Class Petty Officer. Upon his discharge in 1970, Dennis returned to Napoleon and worked for Jackson State Prison as a Stationary Engineer in the powerhouse. In addition to his full-time job, he was a volunteer on the Napoleon Fire Department for 11 years, and worked as an EMT for Transport Ambulance in Jackson for 13 years and delivered two babies while on the crew. It was during this time with the ambulance that he met Karol “KZ” Osborne. The two would marry on November 1, 1980. The couple moved to her hometown, Adrian, MI, where Dennis would live the rest of his life. In the years that followed, Dennis would become a father to KZ’s son, Michael; retire from the Jackson Prison Powerhouse after 27 years, and take on a new career with Signal 88 as a Security Guard at Jackson College with 13 years tenure. Dennis truly cherished the relationships he established with the students and professors. After his final retirement, Dennis enjoyed being home with his wife and cats, going out to eat, taking trips to Hidden Lake Gardens for a picnic, and watch movies and his favorite television shows. He never much liked to travel after his time overseas. He did, however, visit his daughter and her family several times. He also deeply appreciated strengthening his relationship with his grandsons as adults through long talks on the phone. The last few years, Dennis began to suffer from Parkinson’s and Lewy Body Dementia, both a result of Agent Orange exposure in Vietnam. We know that he is now free from that burden. He is loved and greatly missed. Dennis is survived by his wife, Karol “KZ” Bolton of Adrian; siblings Ken (Edie) Bolton, Jackson, MI; Danny (Diane) Gattshall, Perrysburg, OH; and Sandy Lee, Brooksville, FL; daughter Michelle (Robert) Sweeney, Atlanta, GA; son, Michael Osborne and Daniel Long, Adrian, MI; brother-in-law, Wayne (Norma) Chase, Brick, NJ; grandsons, Victor (Paige), Warren, MN; Vincent (Kelli), Lincoln, NE; and Bernard (Marissa), Fargo, ND, Sweeney; five great-grandchildren, Edmund, Arthur, Fiona, Luke, and William; and several nieces and nephews, and Sunday bruncher and friend, Carma King. He was preceded in death by his parents, Phyllis and Lynn; stepdad, Ralph Gattshall; brother-in-law George Lee; and in-laws Marion (Lisowski) and (Betty) Jeanne Lange. A Celebration of Life for Dennis will be held on Thursday, May 27, 2021 at 1:30 p.m. in the Heritage Room at Wagley Funeral Home, Adrian with Pastor Debbie Humphries officiating and military honors conducted by VFW Annis-Fint Post #1584 and American Legion Post #97. A time of gathering will begin at 1:00 p.m. on Thursday and continue until the time of the service. Donations to honor Dennis can be made to the Lenawee Parkinson Support Group (Carter Rehab), Hospice of Lenawee, Veterans Affairs of Lenawee, or the VA Hospital in Ann Arbor. Online memories and condolences may be shared at www.wagleyfuneralhomes.com.

The family of Dennis Ray Bolton created this Life Tributes page to make it easy to share your memories.

Send flowers to the Bolton family.